The good news is that the economy is performing well.  Payrolls have expanded by 1.1 million workers over the past three months.  The September jobs report highlighted employment growth in leisure and hospitality, healthcare, construction, and manufacturing.  There are roughly twice as many job openings as there are unemployed workers in America.  Consumer confidence improved in September for the second consecutive month supported by wage growth and declining prices at the gas pump, according to the Conference Board.  The latest retail sales data for August show a 0.3% gain from July and a 9.1% increase year-over-year.  Real Gross Domestic Product (GDP), after adjusting for inflation, likely accelerated in the third quarter.

The bad news is that the economy is performing well.  Inflation is entrenched within the economy, and the Federal Reserve has made its intention crystal clear to reduce inflation from 6.2% as measured by Personal Consumption Expenditures (PCE), the Federal Reserve’s preferred measure, to its target of 2.0%.  In pursuit of this goal, the central bank has increased its benchmark interest rate by 3.0% thus far in 2022, with additional increases expected in November and December.  The dramatic pace of monetary tightening significantly increases the odds of a recession.  While there have been five increases in the central bank’s benchmark rate so far in 2022, it is the final series of rate increases that have the greatest impact on the economy as monetary policy transitions from neutral to restrictive.

Both the equity and bond markets have fallen hard this year as the increasing odds of a recession weigh on equity prices and sharply rising interest rates weigh on bond prices.  Markets are eager for the Federal Reserve to slow, or stop, the current pace of interest rate increases.  Our baseline expectation is that the central bank continues to lift its benchmark interest rate from 3.125% currently to a range of 4.5% to 5.0% by early next year.  The Federal Reserve is then likely to pause and assess the impact of its near record pace of tightening on the economy.

The economic path that brought us high inflation is well understood at this point.  A combination of fiscal stimulus, induced by the pandemic, and easy monetary policy, a hangover from the Global Financial Crisis, spurred demand within the economy at a time when supply was restricted.  Durable goods, such as cars, electronics, appliances, and furniture, experienced a surge in demand, which reversed roughly 20 years of price deflation in those goods arising from the effects of globalization.  As spending in the economy rebalances – less spending on goods, more spending on services – this increased spending on services is currently contributing to the higher inflation.

The housing sector has become a meaningful contributor to the inflation we are now experiencing, accounting for roughly 40% of the core Consumer Price Index (CPI), which excludes the volatile food and energy components, and nearly 17% of PCE.    The significant weight of housing in the calculation of inflation is warranted as consumers spend about a third of their budget on housing.  Housing, however, presents unique measurement challenges.  Prior to 1983, the housing component of the CPI was based on housing prices, plus incidental costs including property taxes, insurance, and maintenance costs.   As a result, the housing component of the CPI closely tracked the real time change in home price indices.  By largely using house prices to gauge the cost of living, the government was comingling two distinct elements of housing.  The CPI was capturing the change in the value of a house as an investment asset, which the CPI in principle wants to ignore, as well as a good that provides a service – “shelter” – to families that live it in, which is the cost the CPI wants to measure.

In 1983 the Bureau of Labor Statistics altered its methodology for calculating the shelter component of the CPI with the intention of just capturing the cost of each homeowner to “rent” their house.  The change in measurement greatly reduced the volatility of the housing component of the CPI.  The reason that this change is important today is that the inflation indices capture the impact of shelter on the cost-of-living much more slowly than the volatile month-to-month change in housing prices and apartment rents.  As a result, once the cost of shelter begins to rise, it typically continues to move higher for some time.  Our expectation is that the Federal Reserve will be successful in pulling down inflation through tighter monetary policy; however, the mechanics of measuring shelter cost will ensure the decline in inflation reports is relatively slow compared with other components, such as goods inflation that will likely fall more quickly. 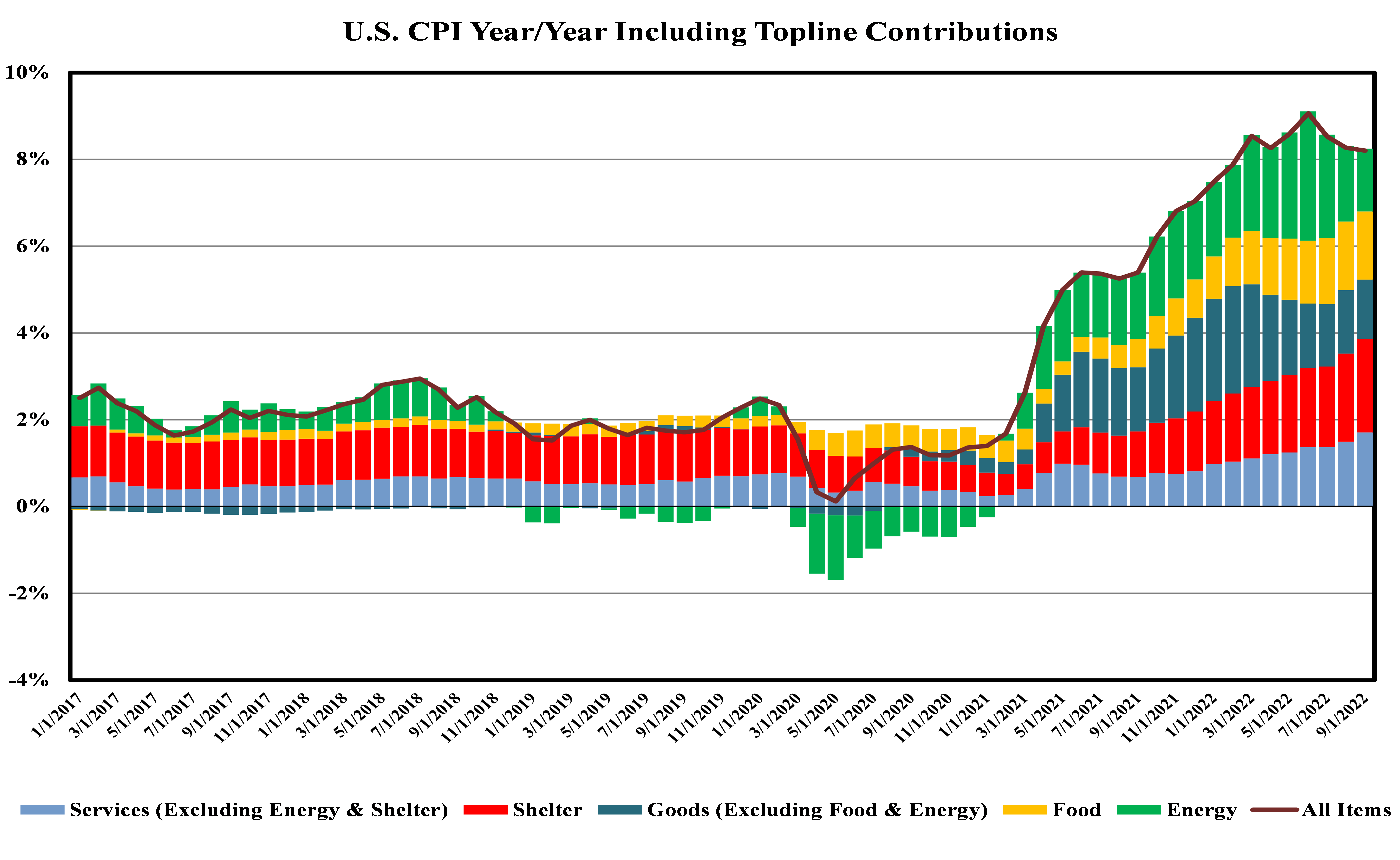 Another critical component in divining the future path of inflation, and ultimately the economy, is the labor market.  In his September press conference, Federal Reserve Chairman Jay Powell indicated that some signs of softening in the labor market will be a necessary precondition for the central bank to put the current tightening cycle on hold.  There is a limit to how far wages (and inflation) can decelerate when the unemployment rate is 3.5% and nonfarm payroll growth is well above trend.  The robust job market is being driven by a combination of factors.  First, employers are “hoarding” labor as it has been incredibly challenging for companies to identify, recruit, and retain workers.  Nevertheless, employees are quitting their jobs at historically high rates which reflects their confidence in finding brighter (and higher paying) prospects.  Another oddity is that over one million workers have not returned to the labor force post-pandemic, perhaps due in part to the proliferation of transfer payments.  Against this backdrop, employers are less willing to trim payrolls for fear of having to rapidly rehire employees when the economy reaccelerates.  Additionally, some industries, such as hospitality and travel, are still in the process of achieving pre-Covid employment levels.  Finally, easing supply chains and manufacturing reshoring are generating greater demand for workers.  The implication of the still-strong labor market is that solid job and wage gains support consumer spending which works against the Federal Reserve’s mission to weaken demand for goods and services in the economy and thereby lower inflation.

Capital markets are facing considerable volatility this year in large part due to soaring inflation and geopolitical unrest.  Over the first three quarters of the year, the Standard & Poor’s 500 Index posted its third worst performance since the 1950’s, declining 23.7%.  Typically, in times of slowing economic growth the Federal Reserve is predisposed to easing monetary policy.  Lower interest rates allow consumers to pull forward demand via lower-cost borrowing, which helps stimulate the economy.  In response to lower interest rates, bond prices rise.  Bonds are typically a good complement to equity prices which often trend lower when economic growth begins to slow meaningfully.  This year has been one of the rare occurrences when bonds have not provided their normal countercyclical balance.  As a result of current 40-year high inflation, the central bank has had to significantly tighten monetary policy this year to combat inflation, causing interest rates to surge.  Therefore, bond prices have fallen precipitously alongside equity prices.  As the chart of equity and long bond returns illustrates below, the first nine months are the worst combination of equity and bond returns over the past 47 years. 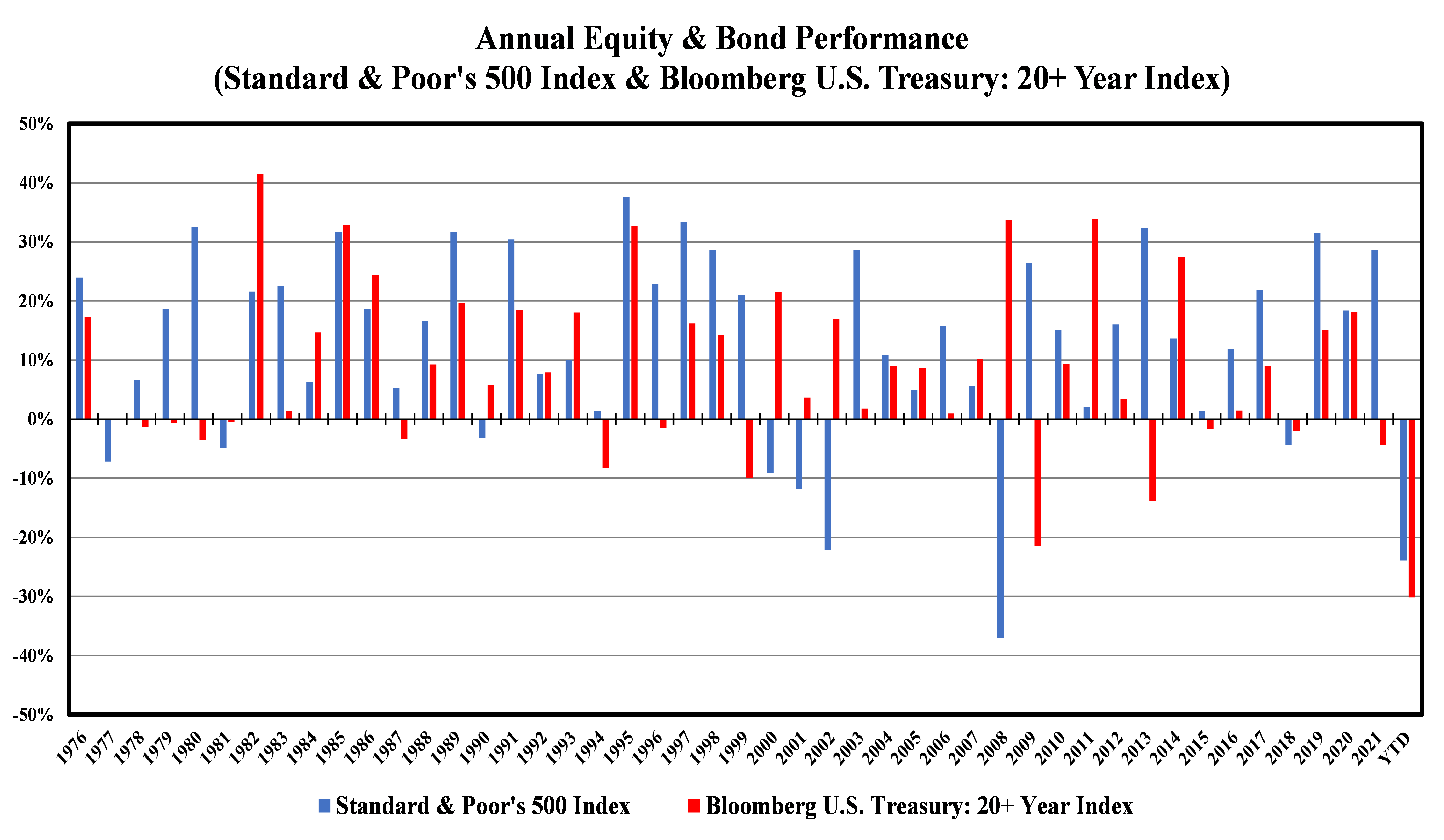 In the 43-year history of our firm, we have witnessed many market swings from excessive enthusiasm to extreme pessimism, and back again.  Experience teaches us that bear markets offer an opportunity to enter the market at a discount.  Timing a market bottom is difficult, but the period it takes to recoup losses from investing early are often worth the reward.  Historical data suggests that being 10% early in a bear market bottom added an average of only 13 trading days to the recovery.  Said another way, the first 13 days of a new bull market has seen the market leap by 10% on average.  In the chart below we average the seven most recent bear markets beginning with 1970 to create a composite of the average market bottoming process. 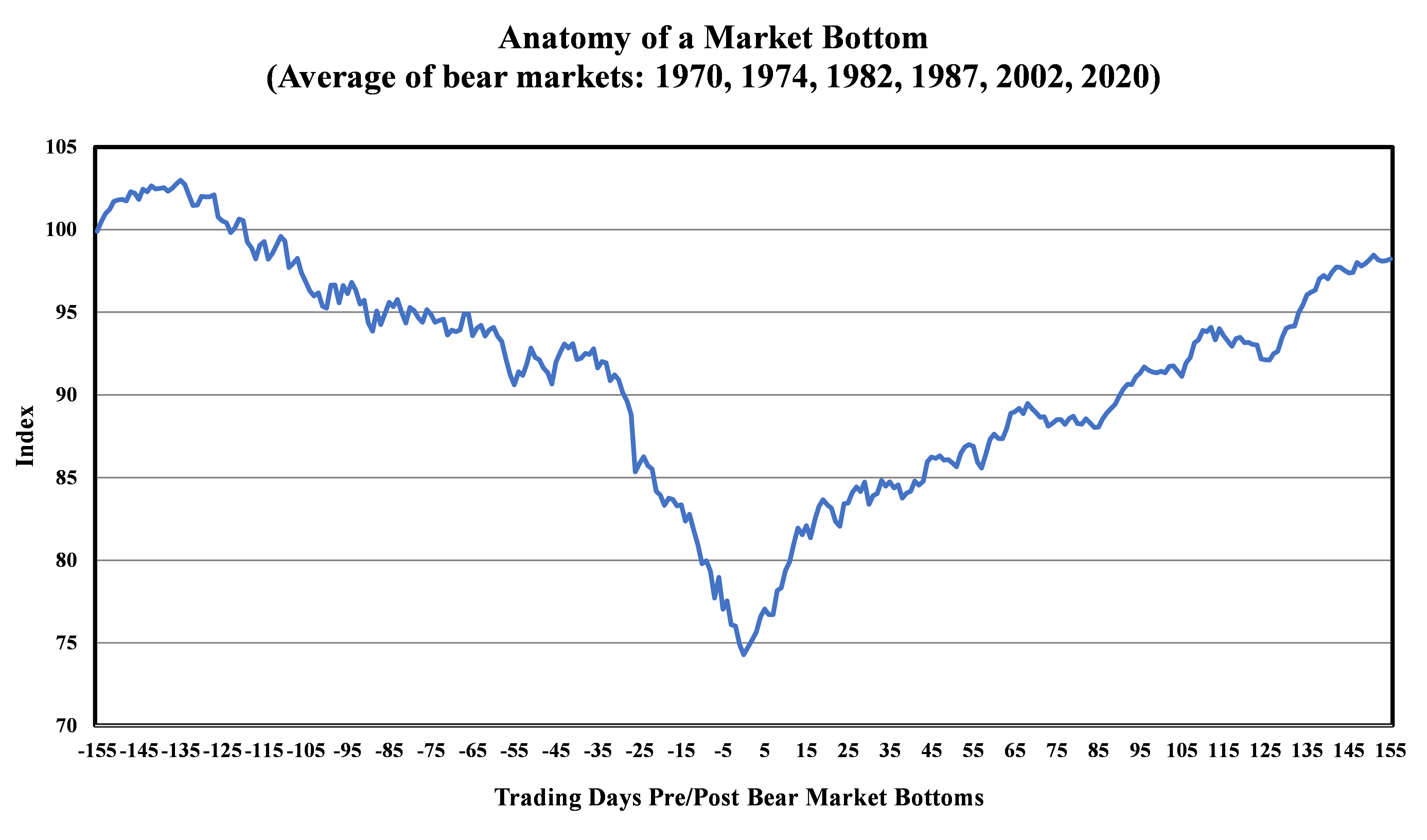 Central banks around the world are rapidly tightening monetary policy to limit the corrosive effects of inflation.  Dramatic shifts in monetary policy globally are reverberating through the foreign exchange market driven in part by a 17% rise in the value of the U.S dollar this year against other major currencies.  The U.S. dollar is often referred to as the world’s reserve currency because it is the medium of exchange that multinational corporations and financial institutions most often use to settle cross-border trade.  For example, oil, wheat, and pharmaceuticals tend to be priced in U.S. dollars when they trade on the world market.  In normal times, foreign central banks might welcome a weakening of their currencies, which tends to stimulate growth by making exports more competitive and encouraging consumers and businesses to buy “local.”  The current challenge is that weak currencies exacerbate an already worrying inflation spiral for many countries.  Central banks in Japan, the U.K., India, and Chile, for example, have all recently had to step in to defend their currencies.  From the Federal Reserve’s perspective, a strong U.S. dollar aids its inflation battle by crimping the competitiveness of U.S. businesses in global markets.

Finally, the midterm elections are fast approaching.  Although Congress is in recess, several critical measures remain on the table for year-end negotiations.  Races for the House of Representatives and Senate have tightened according to recent polls.  The House still leans Republican, and the Senate remains a toss-up.  It would not be a surprise for Senate control to be undecided on election night due to several close contests.  The equity market historically gains little ground in the ten months prior to mid-term elections.  However, in 17 of the 19 midterms since 1946, the market performed better in the six months following an election than it did in the six months preceding the elections.  The twelve months following every midterm election since 1942 has resulted in a positive return for the equity market.  Historical precedence certainly points to markets recovering some of the lost ground over the following year.

Core inflation rates globally remain above central bank targets resulting in a synchronous tightening of monetary policy around the world.  The need to battle inflation with higher interest rates at the same time global economies are weakening dramatically increases the odds of a recession.  Domestically, we believe the Federal Reserve is likely to increase its benchmark rate to a range of 4.5% to 5.0% and then pause to assess the lagging impact of its tightening on the economy.  If further monetary tightening is met with rising unemployment, as forecast by the Federal Reserve, then we believe an economic recession becomes likely.  Given the strong health of consumer and corporate balance sheets, we do not foresee a “balance sheet” recession which requires long recovery periods because credit creation is generally slow to recover in such instances.

Economic travails are numerous and include the inflationary hangover of a pandemic shock, geopolitical tensions, elevated market volatility, and the fastest pace of monetary tightening in decades.  There are seemingly tectonic shifts occurring in the world, such as the reversal of much of the post-Cold War benefits of trade and unrestricted capital flows.  In response, new alliances are being created and old ones are being tested.   An ongoing simmering trade and technology dispute between the U.S. and China and the Russian invasion of Ukraine remain difficult to handicap.  However, as we look forward over the next twelve months, we believe several current headwinds such as high single digit inflation and regular monetary tightening at each FOMC meeting will likely fade.  This should allow the capital market to find much better footing. 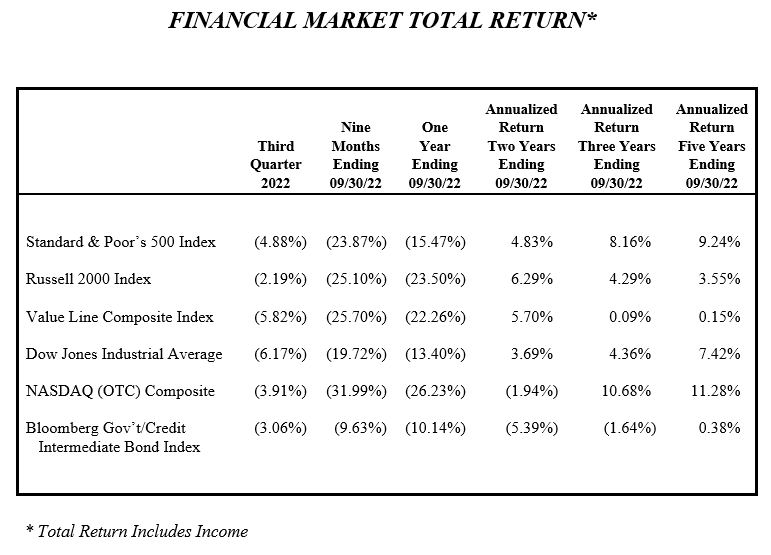