The second quarter brought greater negative returns for international equity markets, as represented by the MSCI EAFE Index, and the makeup of the returns shifted to greater breadth of losses across the index cohorts.  While the MSCI Value Index continued to outperform the MSCI Growth Index for the quarter, the spread narrowed from 12.4% to 4.6%, reflecting both a pause in rising risk free rates for ten year sovereign bonds and greater probabilities assigned to a global recession.  As the value index lost ground during this period, cyclical sectors gave back some of the leadership during the final month of the quarter.  Materials, in particular, underperformed the broad index for the second quarter after recording positive returns during the first quarter.  The price declines for cyclicals mainly occurred in the last month, coinciding with increased economic concerns for China.  Financials and Energy sectors realized similar patterns over these timeframes.

During a “typical” rate cycle, increases in interest rates can weigh on relative valuation for growth as policymakers attempt to extend economic expansion through controlling excess demand to prevent punitive inflation.  As policy rates increase, cyclical companies benefit from stronger near term earnings in an economic expansion.  Once the specter of recession returns, this phenomenon works in reverse as market participants anticipate lower rates and reversal in earnings’ strength for more cyclical industries.  The last few decades have benefitted from deflationary forces driven by globalization, comparative advantage, and productivity gains, promoting rates trending lower and, generally, promoting growth over value for this period.  Economic bubbles contributed to deviations from this underlying trend.  Unfortunately, the current market cycle is not typical, as central bankers struggle to contain inflation with restrictive rates, even as recession risks rise.  We are currently stuck in cyclical purgatory as market participants wrestle with more complex network of counter-veiling, economic forces without nimble central bankers who could historically respond with swift accommodation in a backdrop of low inflation and greater slack in labor markets. 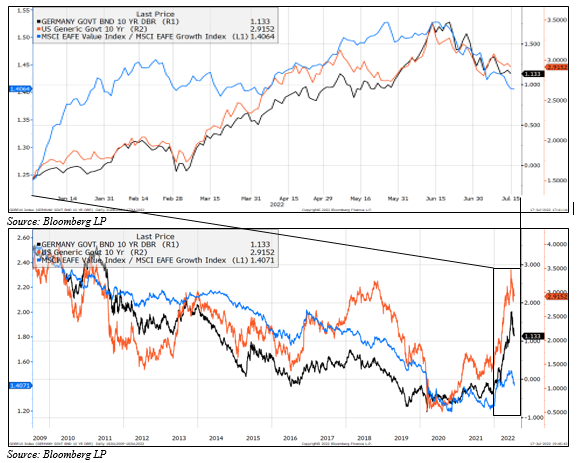 The challenge in this environment remains the assessment of long term, intrinsic value.  A period of extraordinary negative real rates promoted the present value of longer duration growth, and relative valuation soared for this cohort.  Though the ratio of multiples may shift as negative revisions for earnings incorporate recessionary headwinds, the June rotation has again pushed growth relative valuation to near historic highs, due to multiple compression on cyclical companies.  These conditions communicate that some growth has regained favor relative to cyclicals as economic outlooks have deteriorated, but the trajectory of inflation will determine if the entire complex will need to come down further in order to accommodate both persistently higher interest rate and lower cyclical earnings. We are trying to maintain shorter duration and more defensive growth as the most volatile parts of the market will likely be longer duration.  While this positioning could miss a surge in prices for more speculative growth, uncertainty remains very high and analysis of intrinsic value for an individual security under various scenarios will be increasingly important.

Inflation continues to be the single most important variable in determining the future trajectory of this market, due to an implicit “tax” on consumption and required policy to return to target core inflation (2.0-2.5%).  While supply chain disruption due to COVID introduced initial disruptions, evolving events surrounding the invasion of Ukraine by Russia have introduced additional challenges for European companies, as well as potential collateral impacts (e.g. delivered LNG costs for Japan have increased from $13.17/mmBTU last year to ~$38.43/mmBTU recently).  As noted in the prior quarter’s economic review, Europe developed a concentration risk to Russian natural gas with some countries’ concentration higher than others.  While the United Kingdom received only 4% of their natural gas supply from Russia in 2021, Germany received 55%.  The price impact will be felt by the U.K.’s consumer and industry, but the risks of curtailed deliveries has a greater impact on Germany’s industrial base, which consumes ~36% of total domestic natural gas.  Power generation accounts for 9%, but recent attempts to restart some coal power plants will continue to face challenges, as historically Russia also accounts for 70% of German coal supplies.  Risk for curtailment should be considered, as Russia has already cut off sales to Finland, Denmark, Poland, and Bulgaria and halved deliveries to Italy.

There is a concern that sharply higher natural gas prices could permanently damage some of Germany’s largest industries – producers of aluminum, glass, and chemicals – which are large consumers of natural gas.  Gas rationing would prevent full utilization of plants, and below certain utilization rates some of these plants may not be able to cover the fixed costs.  According to the country’s contingency plan, industrial users of natural gas would be the first users required to ration consumption.  Already, pressures have mounted due to price dislocations, and Uniper, a major German utility, has recently sought a bailout as their operating losses could reach $10bn this year.  Aluminum and steel smelters require minimum throughput, and any disruption leading to closures would require approximately nine months to restart.  These are heavy burdens for Germany’s industrial base, but the recent resumption of deliveries – albeit at 40% levels – after the planned maintenance for Nord Stream could ward off the most dire scenarios.  Regardless, the power and natural gas costs will chip away at competitive position and margin.  Adding to the challenge will be risks for further devaluation of the Euro, as economic prospects fade.  Since natural gas contracts are priced in U.S. Dollars, the purchasing power will be impaired by a weaker currency.  These high USD-denominated expenses could also undermine some of the benefit that a weaker currency could lend to net exports.

While these challenges will certainly have broad impacts on many economies through both food and energy, they could be defined as “transitory” supply disruptions.  In my career, I have witnessed the commodity super-cycles in the 2000s, which ultimately had limited impact on core inflation, which excludes food and energy.  Core inflation remained anchored <2.0% in Germany despite higher headline inflation during the commodities super cycle.  Higher headline inflation came from volatile food and energy components, allowing policy to move quickly towards accommodation to stimulate growth as economies slid into recession.  Unfortunately, there are risks that COVID and Russia supply disruptions, coupled with extraordinary “pandemic” global monetary and fiscal stimulus, became simply catalysts for a stickier core inflation at a time when globalization may have less deflationary influence and unemployment rates remain at historic lows.  Though busy, the charts below highlight policy rates (orange) dropping with the weakening GDP (pink) when headline CPI (black) was elevated but core CPI (blue) remained anchored below 2% during the financial crisis of 2008-2009.

So, we are back to the crystal ball.  Will an economic slowdown and monetary policy lead to lower inflation rates and provide some headroom for future accommodative policy, if needed?  Or will inflation prove to be more structural (e.g. low unemployment supporting sustained increases in price for shelter – a big component of core CPI) lending to a more challenging environment for resumption of expansionary policy?  I expect that real consumption will likely decelerate as price elasticity of demand takes root and real, discretionary income declines and purchasing power of household savings erodes.  Elevated savings rates, pandemic transfers, “revenge” spend, and wealth effect all contributed to strong demand for consumer goods, but these dynamics work in reverse, as well.  As consumer confidence and new orders series continue to plunge, I believe that we have hit the apex of inflationary pressures from commodities and consumer goods.  But, the services component has been relatively quiet, which includes shelter.  We have recently seen these numbers starting to contribute more to core inflation, and further increases may sustain inflation at levels above target.  Either way, we anticipate pressure on domestic consumption component of real GDP, as wages continue to lag inflation and low consumer confidence impedes real, domestic consumption.

One contributor that could offset domestic pressure is trade activity.  China is the largest trade partner for Japan and the second largest for Germany.  During the financial crisis, China’s real GDP continued to grow at nearly 10% in 2008 and 2009, providing some support to German GDP after their consumption turned negative.  The recent declines in growth of real GDP for China could belie this economy’s ability to provide an offset to decelerating domestic demand from other markets.  Renewed COVID cases in certain markets could continue to weigh on economic activity due to zero COVID policy and related restrictions.

While weaker numbers could rebound after COVID-related restrictions fade, recent failures of property developers raise the risks of more structural weakness beneath the surface.  In addition to reports of distressed property developers, there are now a number of accounts of boycotts on mortgages for residential assets under construction, of which 85% of residential units are now presold.  The Chinese residential property market has been described in recent years as the most important sector in the world, which now supports ~$100tn of value in Chinese real estate.  These boycotts, which have been building momentum, could further risk economic growth and consumer sentiment, as residential property represents approximately 70% of household wealth in China, far more than in the U.S.

Other less prolific articles also highlight weakening employment prospects, particularly, for the youngest, demographic cohort.  There are few details available, and data series for vacancies and applicants have not been updated since last fall.  At that time, job vacancies were at low levels not seen since the fourth quarter of 2008.  Expectations and sentiment data, presented in the following charts, exhibit negative expectations by depositors for employment and income.  Consistent with the deterioration in sentiment, household deposits have ballooned due to both COVID restrictions and cautious outlooks, which may provide some dry powder for consumption in future quarters if sentiment reverses.  China is a difficult market to forecast, as the economic data is of questionable veracity and the “command and control” nature enables responses from autocratic government unavailable to freer marketplaces.  There have been recent increases in infrastructure bonds and decreases in policy rates in an attempt to mitigate the economic impact of COVID closures and a weak residential property.  Zero tolerance policies could also be a solid explanation for weaker labor markets, which could reverse abruptly.  Last week, China’s National Bureau of Statistics reported annualized real GDP growth of only 0.4% in the April to June period.  Overall, it appears that China’s real GDP will likely grow well below their target 5% growth rate during 2022.  Despite these challenges with forecasts, the current environment may be less supportive of goods exports from Japan and Europe and natural resources from Australia.  A reduction in export volume would weigh on growth for economies with positive net exports into this region. 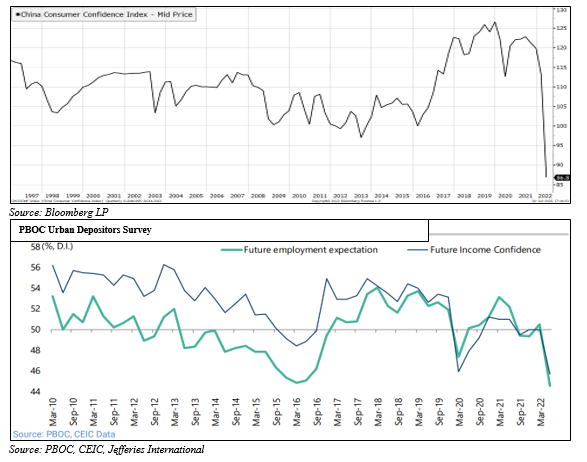 The current outlook is likely to pose headwinds for economic activity over the next few quarters for many of the developed markets.  The slowdown in China, combined with restrictive monetary policy, will likely translate to drags on real GDP growth due to disrupted supplies chains, decreasing consumer sentiment, and increasing inflation expectations, tight labor markets, and Russian aggression.  Whether or not these factors lead towards a global recession have not been determined, though probabilities of recession have continued to increase.  The equity markets tend to be a discounting mechanism for expectations, and the rapid decline during the prior two quarters clearly point towards economic stress.  A more optimistic view of the equity prices can be gleaned from historical return patterns and a drawdown analysis for the MSCI EAFE.  Excluding the current bear market, there have been fifteen six-month periods with drawdowns greater than 14% since 1970.  Some of these periods overlap during particularly painful times (2008-2009, 2001-2002, 1973-1974).  Yet taking all of these into consideration, the average eighteen month price return after a drawdown of these magnitudes is 20.6% for the index, as the market starts to discount a more constructive outlook, though coincident data series may continue to reflect economic stress.