The Federal Reserve is battling broad-based inflation and has indicated a willingness to cause some economic pain to restore price stability.  Since the beginning of the year, financial conditions have been tightening as capital markets have internalized the Federal Reserve’s anti-inflation crusade.  The tightening of financial conditions, including increased borrowing costs and rising U.S. dollar, amplify recession risk.  While the magnitude of financial tightening remains short of recent cycles, the pace of tightening has been rapid, contributing to historically large swings in assets values.

Although the need for more restrictive monetary policy to reduce inflation threatens the current economic expansion, crucial underpinnings of the economy remain solid.  For example, most consumers currently have a historically low household debt-to-income ratio, significantly higher bank deposits than pre-pandemic, and rapid wage growth.  Even as consumer pessimism towards the economy grows, in aggregate consumers are relatively well positioned for an economic downturn.  In addition, corporations are likely to post record earnings this year as many firms have passed along rising input costs to customers.  However, the trajectory of future corporate earnings will depend heavily on whether or not the economy enters a recession.

The first half of the year has marked the worst start for the Standard & Poor’s 500 Index since 1970, declining 20%.  The growth laden NASDAQ Index has corrected harder, falling 29.2% through June, marking its worst first half on record.  The performance of equities in the second half of the year will depend greatly on the shifting outlook for inflation, interest rates, and corporate profits.

Many Americans are worried about a recession.  The closely watched monthly University of Michigan Consumer Sentiment Index dates to 1966 and is intended to assess near-time consumer attitudes on business climate, personal finance, and spending.  The recent June index reading was the lowest reading on record.    The University of Michigan commentary informs us that about 79% of consumers expect bad times in the year ahead for business conditions.  It is not only consumers who are anxious, but also corporate executives and lawmakers who show concerns.  Regardless of what economic data suggest about the health of the economy, consumers are pessimistic about the future.

The odds that the current economic expansion falters have steadily increased during the past several months.  The Federal Reserve has clearly and unequivocally declared its intent to fight inflation.  Therefore, the central bank has increased its benchmark interest rate by 0.25% in March, 0.50% in May, and 0.75% in June.  The last time the central bank increased its benchmark rate by 0.75% was November of 1994.  Interestingly, that period marked the last time the Federal Reserve successfully engineered a soft economic landing, increasing its benchmark interest rate to reduce inflation while not triggering a recession.

Financial conditions significantly influence the spending, saving, and investment plans of businesses and households. The Federal Reserve intends to use its monetary tools, primarily its benchmark interest rate, to influence financial conditions.  Four of the primary components of financial conditions are the level of interest rates at different maturities, credit spreads, the U.S. dollar, and equity market levels.  Each of these items directly influences the economy, and the interplay of these elements collectively encourages or discourages economic behavior.  For example, the overall level of interest rates is a key component of mortgage rates and corporate borrowing costs.  With house prices increasing 20.4% year-over-year, the central bank is anxious to cool the upward pressure on the shelter component of inflation.  The recent rise in mortgage rates should cool the sharp increase in residential real estate activity and values.

Widening credit spreads, or the rate premium over government bonds that investors demand in compensation for risk, restrain lending growth and corporate investment.  The U.S. dollar also has appreciated 13.3% relative to our major trading partners over the past twelve months, translating into additional financial tightening.  In general, a stronger U.S. dollar stifles growth via reduced demand for our exports.  Finally, lower equity prices suppress growth in consumer spending through the negative “wealth effect.”  This dynamic supports the notion that as households become richer via rising asset values, they are inclined to increase consumption, thereby stimulating the broader economy.  The wealth effect naturally works in reverse, as well, with the negative wealth effect inhibiting consumption.

Many market observers have suggested that the Federal Reserve is “behind the curve.”  By the time the central bank realized that rising inflationary pressure was unlikely to dissipate on its own, inflation was already on the path to become broad and entrenched.  In the previous three business cycles, it was the tightening of monetary policy that contributed significantly to tighter financial conditions.  Today, capital markets are out in front of the central bank and reflecting heightened concern over a slowing economy.  The Federal Reserve may not have to raise interest rates as much as it otherwise would if the continuation of tightening financial conditions does the central bank’s bidding.  This factor is important because monetary policy, as economist Milton Friedman observed, acts with a “long and variable lag.”  Therefore, actions taken by the Federal Reserve to squelch inflation carry inherent risk that the central bank overtightens monetary policy into a slowing economy and precipitates a recession.  Perhaps the rapid transmission through markets will reduce the risk the Federal Reserve overshoots inflation risk and contributes unnecessarily to an economic recession.

The global energy crisis continues to spur headline inflation, and more critically, is applying further supply side pressure on the global economy.  Manufacturing facilities in Europe that produce steel, fertilizer, and chemicals cannot cope with surging electricity costs, and European natural gas futures have risen to levels roughly ten times higher than a year ago.  Energy rationing is highly likely in parts of Europe if Russia further curtails energy exports.  Domestically, we have similar challenges with gasoline prices rising 62.6% over the past twelve months and high electricity costs contributing to pressure on consumers and businesses.  Century Aluminum Company recently announced it intends to idle its plant in Hawesville, Kentucky – an action rarely taken by aluminum producers because it takes a month to properly prepare the mill to suspend operations and more importantly it can take six to nine months to restart the mill.

The various ways economists measure economic activity can generally be grouped into one of three timely categories: 1) anticipatory data that lead the economy, 2) coincidental measures of activity, and 3) lagging economic indicators.  As we survey the landscape today, several leading indicators including the Treasury yield curve, building permits, ISM Index of New Orders, credit spreads, equity markets, and of course consumer expectations all point to slowing economic growth ahead.  Important coincidental economic indicators such as rising initial jobless claims have risen only slightly.  We will be closely watching initial jobless claims going forward.  Finally, lagging indicators such as bank lending and the unemployment rate are currently flashing positive economic signals.

While all economic recessions are unwelcome events, they historically vary widely in severity.  Today, there is relatively little leverage in the private economy.  Household debt remains tame and corporate balance sheets remain reasonably levered.  Many firms secured historically low-cost funding during the prior two years.  The labor market is structurally tight, which is a blessing and a curse.  Without structural imbalances in the economy, or excess private leverage, any ensuing recession is likely to be relatively mild in our view.

The current bear market in stocks has occurred during a bull market in corporate earnings.  Arguably the greatest risk to the equity market is that we enter a period of declining corporate earnings.  Such a development would be consistent with an economic recession.  The 20.6% decline in the Standard & Poor’s 500 Index (excluding dividends) during the first half of the year is the sole result of a contracting Price/Earnings multiple, as the chart below illustrates.  Expectations for growth in corporate earnings during 2022 have risen 4.1% since the beginning of the year.  However, the Price/Earnings multiple has declined from 22.7X to 16.6X, a contraction of 26.8%.  While valuations generally tell us little about the immediate direction of the market, they do shape our view of risk being assumed. 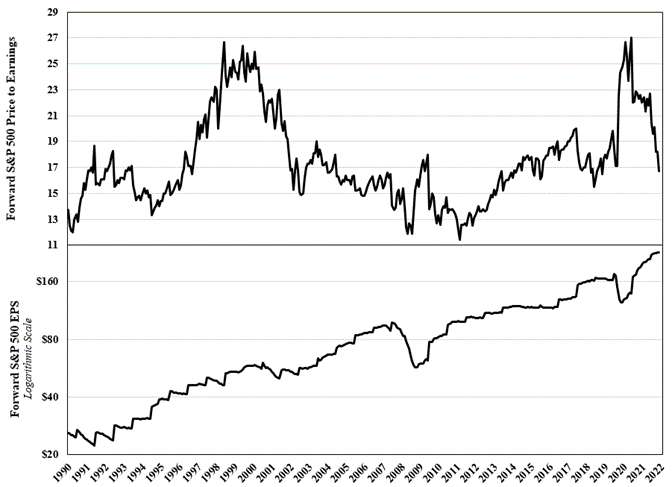 If a recession were to materialize, we would anticipate a decline in corporate earnings.  The chart below illustrates the peak-to-trough decline in Standard & Poor’s 500 Index earnings per share during each of the past twelve recessions.  It is important to note that the worst earnings contractions have historically been accompanied by concentrated sector weakness.  The major losses in specific sectors do not communicate the breadth or narrowness of the economic contraction.  For example, only one sector of the market accounted for almost half of the earnings decline in 1990 (autos), 2001 (technology), and 2008 (financials).  Today we do not currently see any one sector of the economy that could trigger the magnitude of earnings decline that occurred in the three greatest earnings drawdowns. 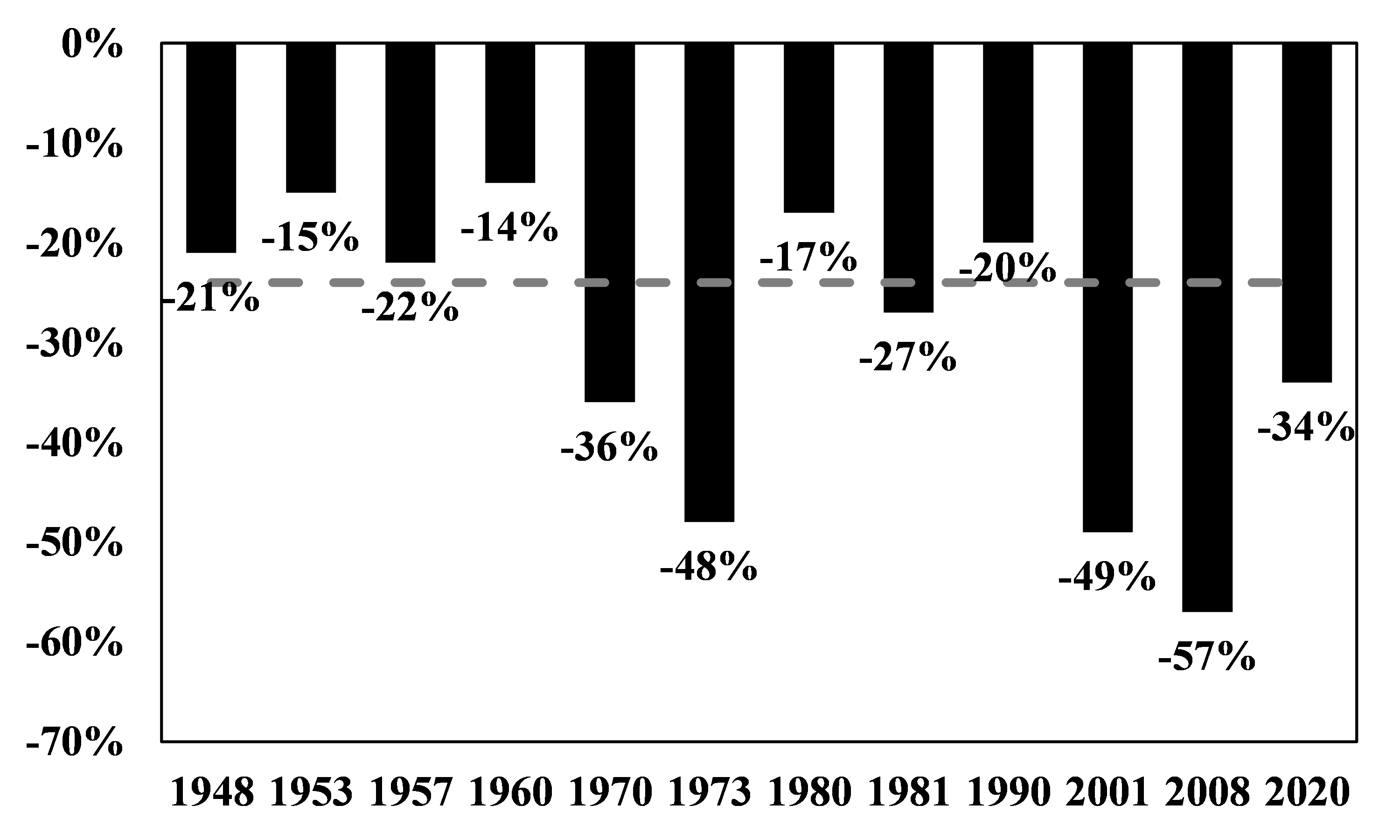 Many asset values take their cues from the anticipated direction of monetary policy.  These values certainly include the Treasury market.  Yields on 1- to 3-year bonds generally begin to rise ahead of the Federal Reserve’s action.  The outlook for intermediate to longer-term bond yields is cloudier because inflation expectations are a key component of longer-term bond yields.  The concern for inflation is the key reason why the return on the 10-Year Treasury note fell 11.3% during the first half of the year.

High inflation is contributing to consumer uneasiness.  The record low June reading of the University of Michigan Consumer Sentiment Index eclipsed the previous low in November 2008.  The economy, however, faces the opposite set of problems it confronted in 2008.  Fourteen years ago, demand was too weak, there were not enough jobs, and deflation was a concern (CPI in December of 2008 was 0.1%).  Today, the economy is overheating, there are nearly two job openings per unemployed worker, and inflation is at a forty-year high. The challenge for policymakers is to strike a balance between the appropriate amount of tightening to lower inflation, while preserving the economic expansion.  The equity market has already digested the unfolding economic slowdown.  If the current slowdown presages a recession, then the equity market may have to reprice lower as corporate earnings will likely be at risk. 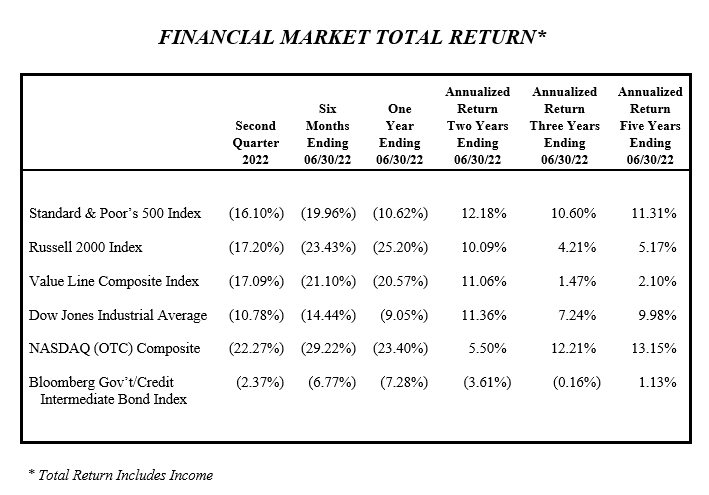