While we trained our eyes to the PMIs, unemployment rates and wage growth in prior quarters in order to forecast the sustainability of growth and durability of consumption in a global expansion, the rapid deterioration of conditions due to a self-inflicted recession in response to a global pandemic has turned our attention to epidemiological data, virological research and development, and mobility data in an attempt to triangulate if and when there might be a path towards a more “normal” environment.

Europe led the United States in the initial infection rates, as Chinese tourists into Italy and Spain likely introduced the virus to these markets.  These markets abruptly went towards “shelter-in-place” policies, which caused the economic and consumer activity to plummet.  Economists estimate that GDP in the U.K. dropped by 25% between February and April, implying a 7.5% annualized rate with everything else held constant, which is unrealistic.  Many countries enforced travel restrictions with both European countries and non-European countries.  These travel restrictions not only handicapped trade and commerce but also impaired tourism, which accounts for a material part of GDP for many countries.  Japan and Australia also saw early infection rates and were forced to respond similarly. 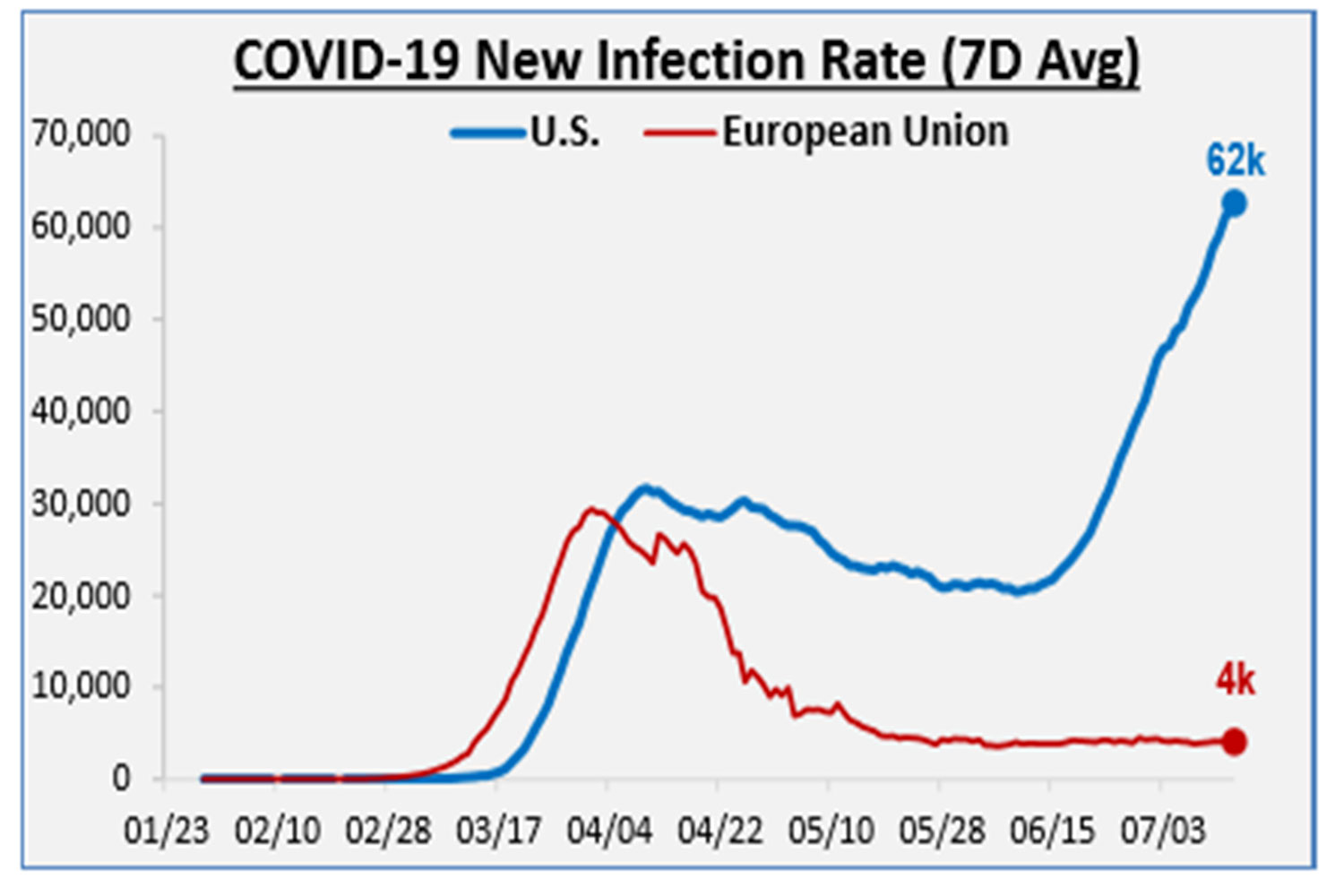 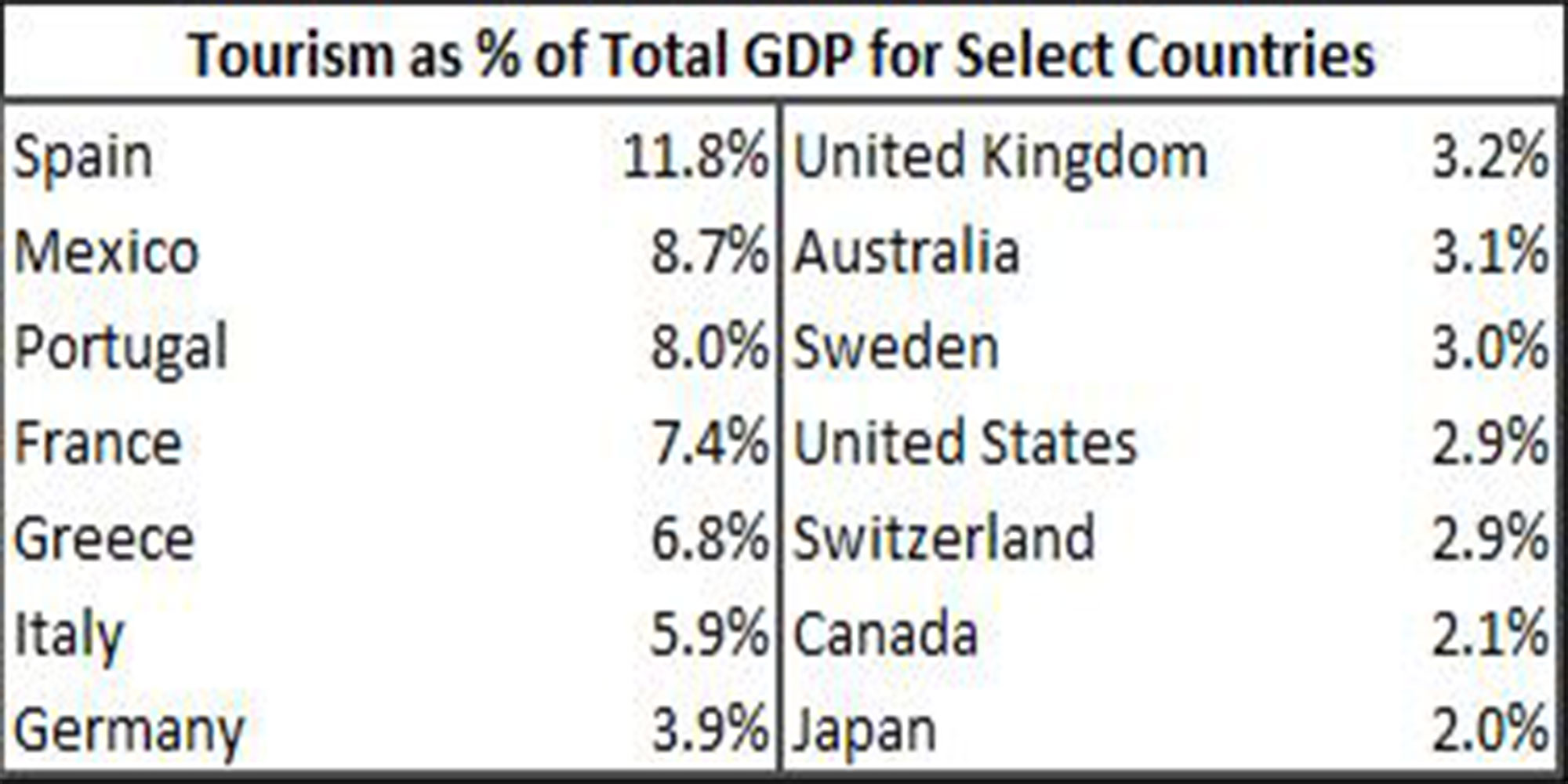 While the initial impacts of the virus can now be better understood, the shape of a recovery remains somewhat elusive.  This uncertainty prompted record responses in the form of both monetary and fiscal stimulus.  Evercore ISI maintains a tally of the number of global stimulus actions over the past year, and that number has reached an unbelievable 547 actions taken by governments and central banks.  Japanese fiscal responses seemed weak initially and then have exploded to the upside with the most recent fiscal stimulus, announced mid-July, alone representing ~20% of their annual GDP.  Alternatively, the U.K. broke strong out of the gates with strong rhetoric but has faded more recently in the materiality of their policy.  Their cumulative programs, which include loan guarantee and liquidity programs, appear to slightly eclipse the 20% of GDP mark.

The European Union appears to have emerged as the dark horse candidate for fiscal coordination.  Until last week, the European response was piecemeal with fiscal constraints from conservatives impeding hopes for coordinated efforts for fiscal stimulus across member states, which remained consistent with prior cycles.  In a major turn of events, Angela Merkel joined Emmanuel Macron to champion a fiscal program through the European Council despite the resistance of Merkel’s former fiscal allies, including the Netherlands and Austria.  The total fiscal budget accounts for ~10% of the European GDP in an action that has been dubbed the EU’s “Hamiltonian Moment.”  Time will tell if this action is the harbinger of a new era for a union where, historically, many member states – and rightfully so from my federalist perspective – have viewed a central tendency of power with some caution.  Regardless, last week’s action provided a massive shot in the proverbial arm to help weaker nations recover from the health crisis.  The chart below exhibits the most recent estimates of all stimulus programs for major global economies. 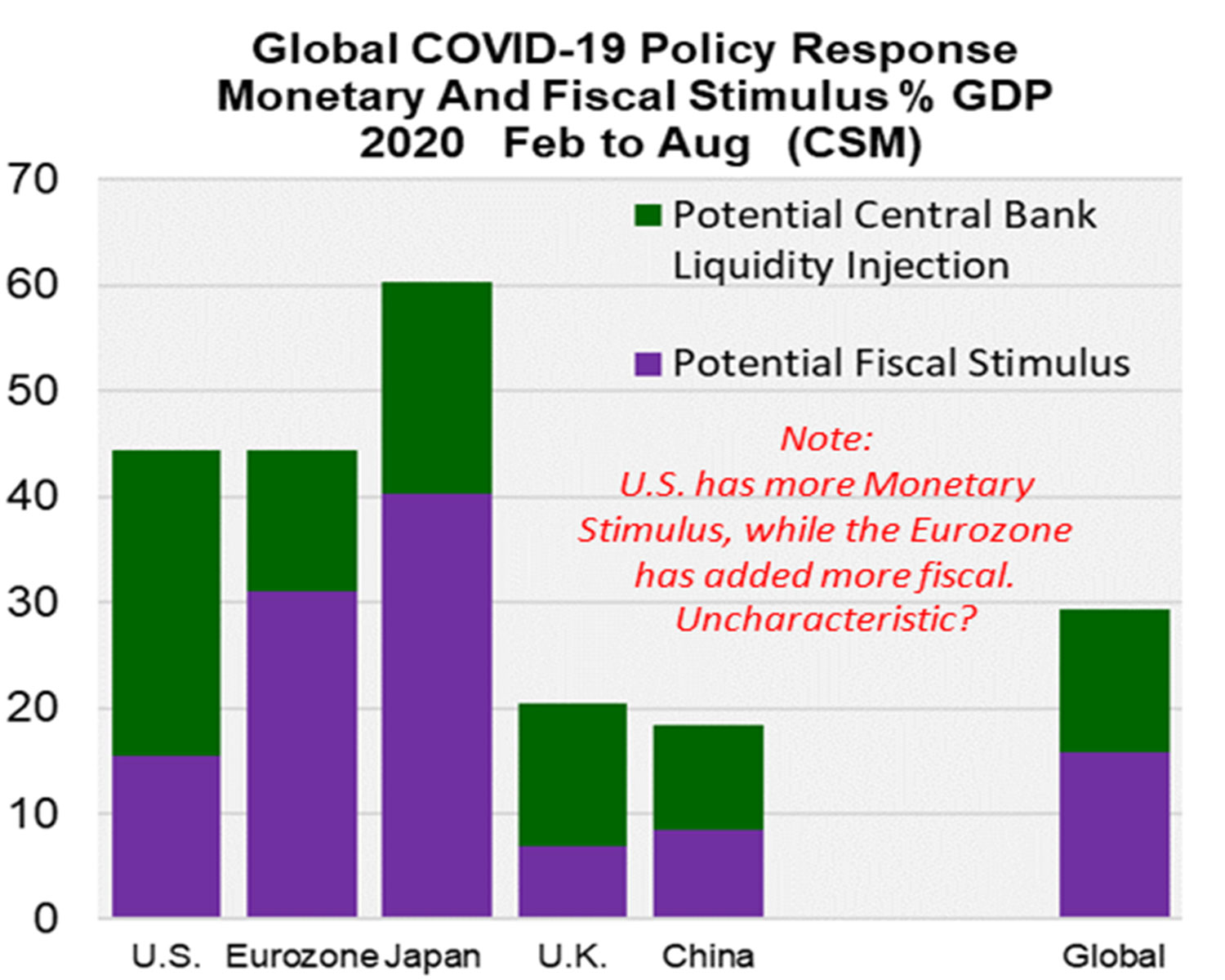 In addition to the fiscal actions taken by leadership, the central bankers responded immediately.  Central banks with flexibility (e.g. US Fed, BOE, RBA) dropped target rates to record lows.  Systematically, central bankers employed the “alphabet soup” from the Global Financial Crisis to promote credit and liquidity.  For good measure, they introduced additional programs to reduce the risk of systemic failures in the credit market and support growth in money supply.  The quantitative easing (QE) programs were reignited with new asset classes being purchased onto the reserve banks’ balance sheets.  In Japan, the BOJ has expanded the purchase of equity securities through introduction of ETF purchases.  They have been adding these securities at such a rate that they would own 9% of the current market cap of the Tokyo Stock Exchange within eighteen months.  Though I view this concentration as unlikely, it certainly highlights the expansion of the QE programs well beyond the simple purchase of government bonds from banks, which was the initial foray by the BOJ in 2001.  Whether through low rates, quantitative easing, or various liquidity and lending programs, the objective of these central banks is to drive money growth and stimulate a credit impulse (rate of flow of credit).  While we are still in early innings of the economic impacts of monetary stimulus, as it often takes eighteen months to transmit through the system, the early data show the effects of policy action. 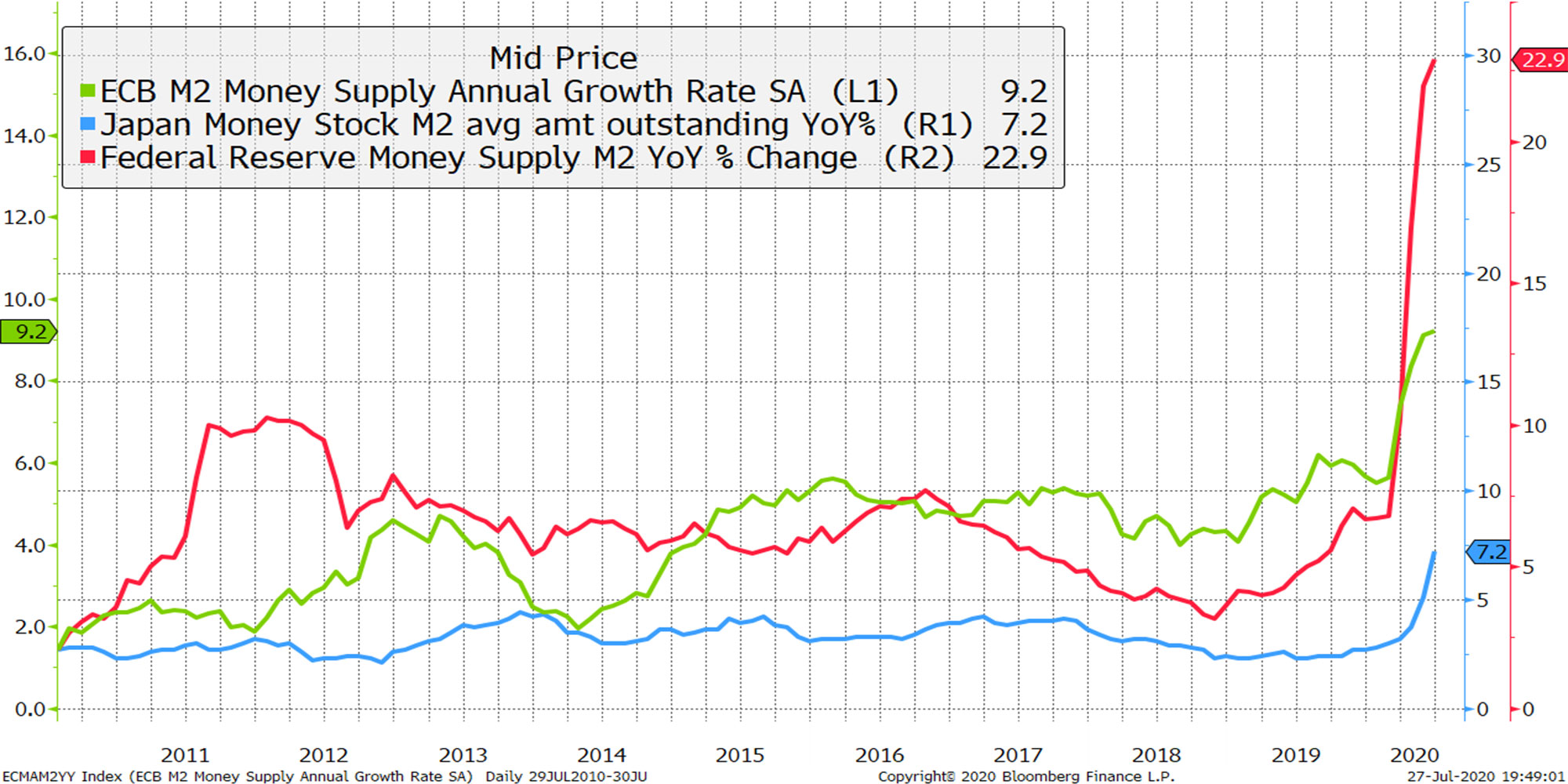 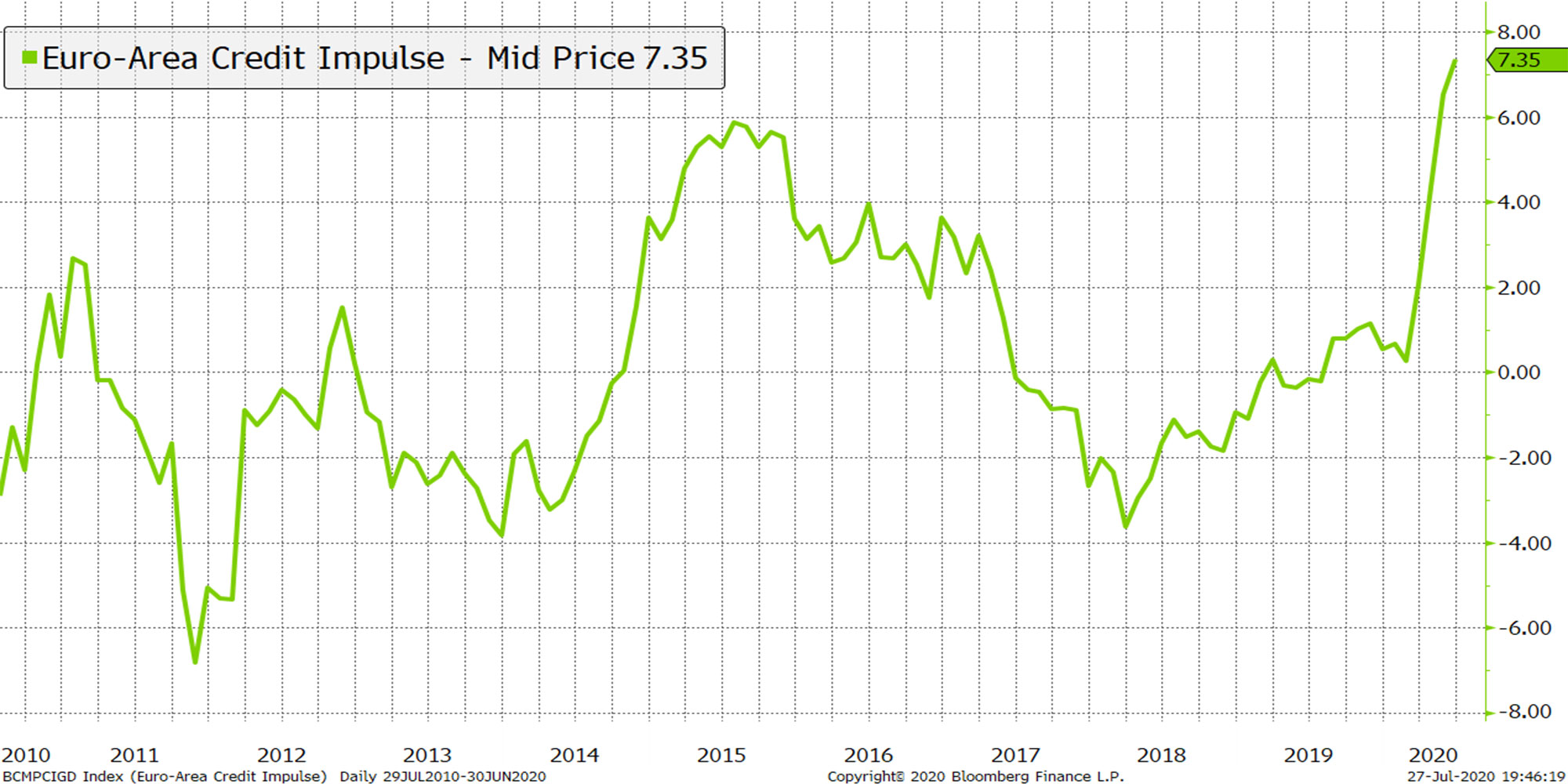 The unprecedented size of these actions will still not be able to offset the immediate impact of these decreases in economic activity, and some economic data will be – well – ugly.  The shelter-in-place policies which attempted to stunt the pandemic came at a cost.  The critical issue now is whether or not the “patient” is headed towards imminent recovery and future growth.  The aggregate new infections rate for the European Union in the prior chart certainly would engender some optimism, and the Apple mobility data supports this thesis, as exhibited by the charts below.  There have been some increases in new cases in certain countries (Spain and Japan), but these have not been met with the same draconian policies from the initial wave.  Japan will certainly be an early case study as they have seen new cases spike, but fatalities have remained very low.  During the first wave, fatalities tended to lag by approximately a month.  A rapid development of treatments and vaccines would support confidence that both new cases and fatalities can remain low.  Initial phases of clinical studies show promise but are far from a “sure thing.”

As shown by the green arrows in the charts below, great trends are in place for the recovery of mobility for local populations and domestic economic activity. 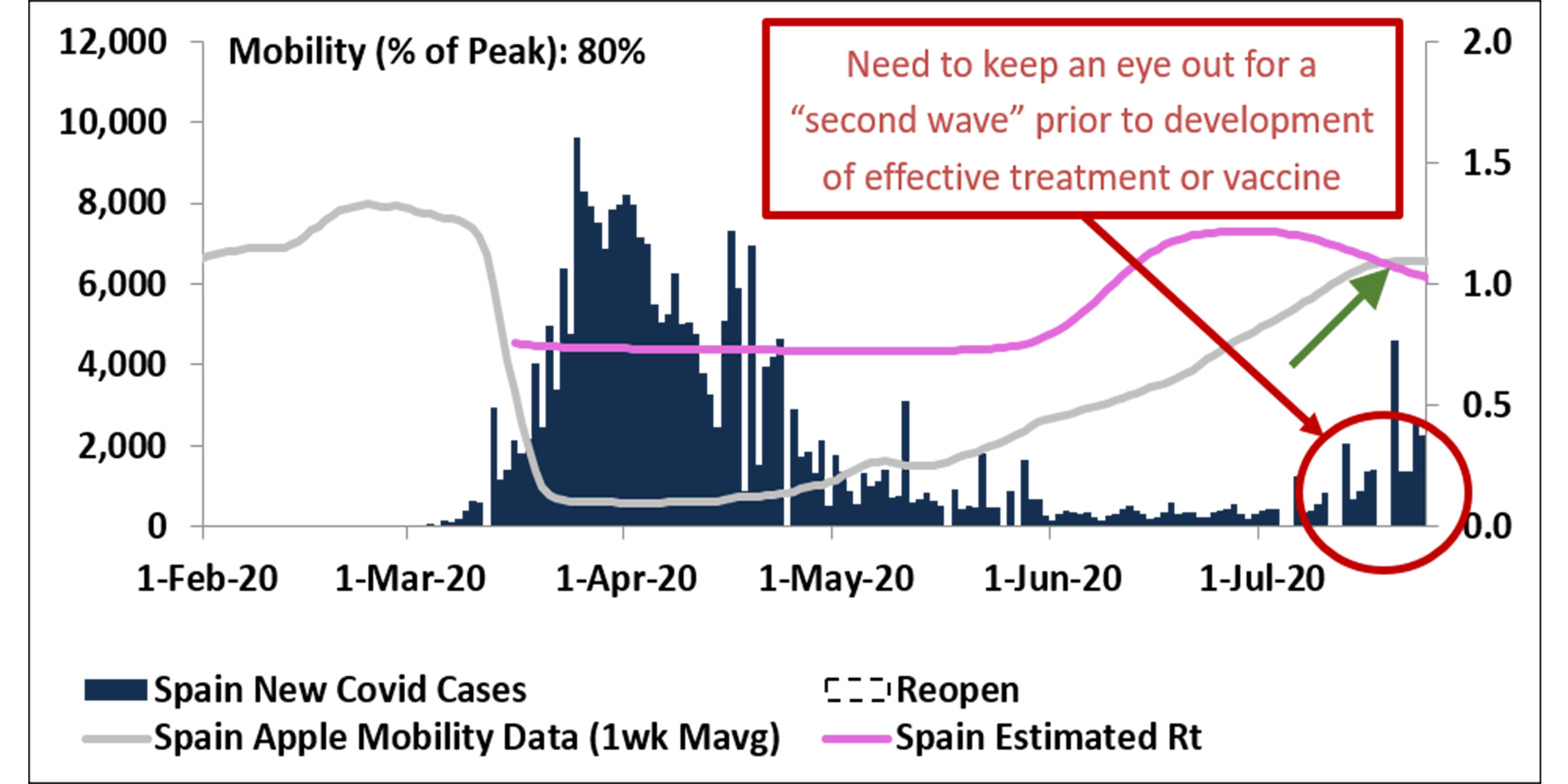 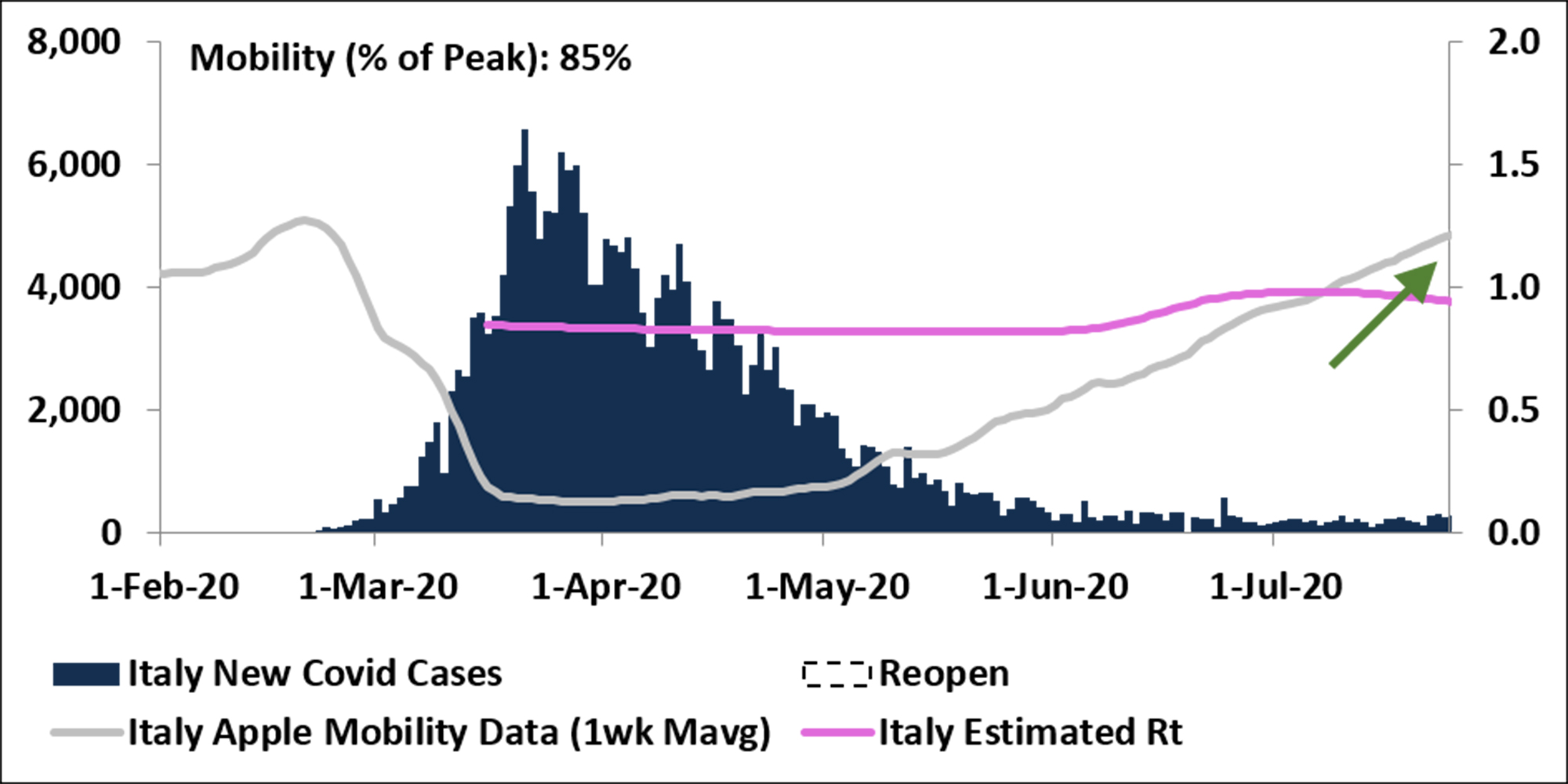 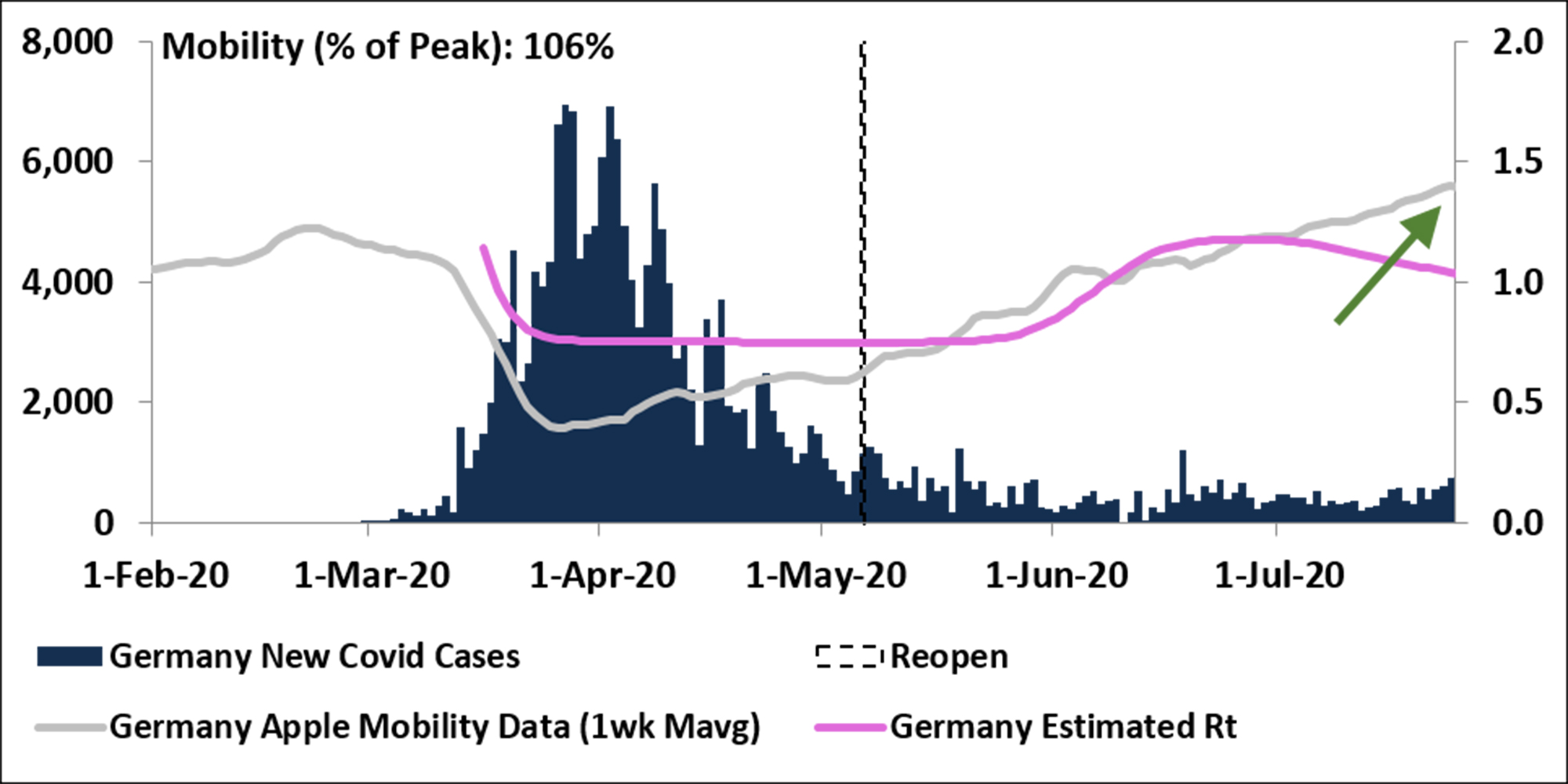 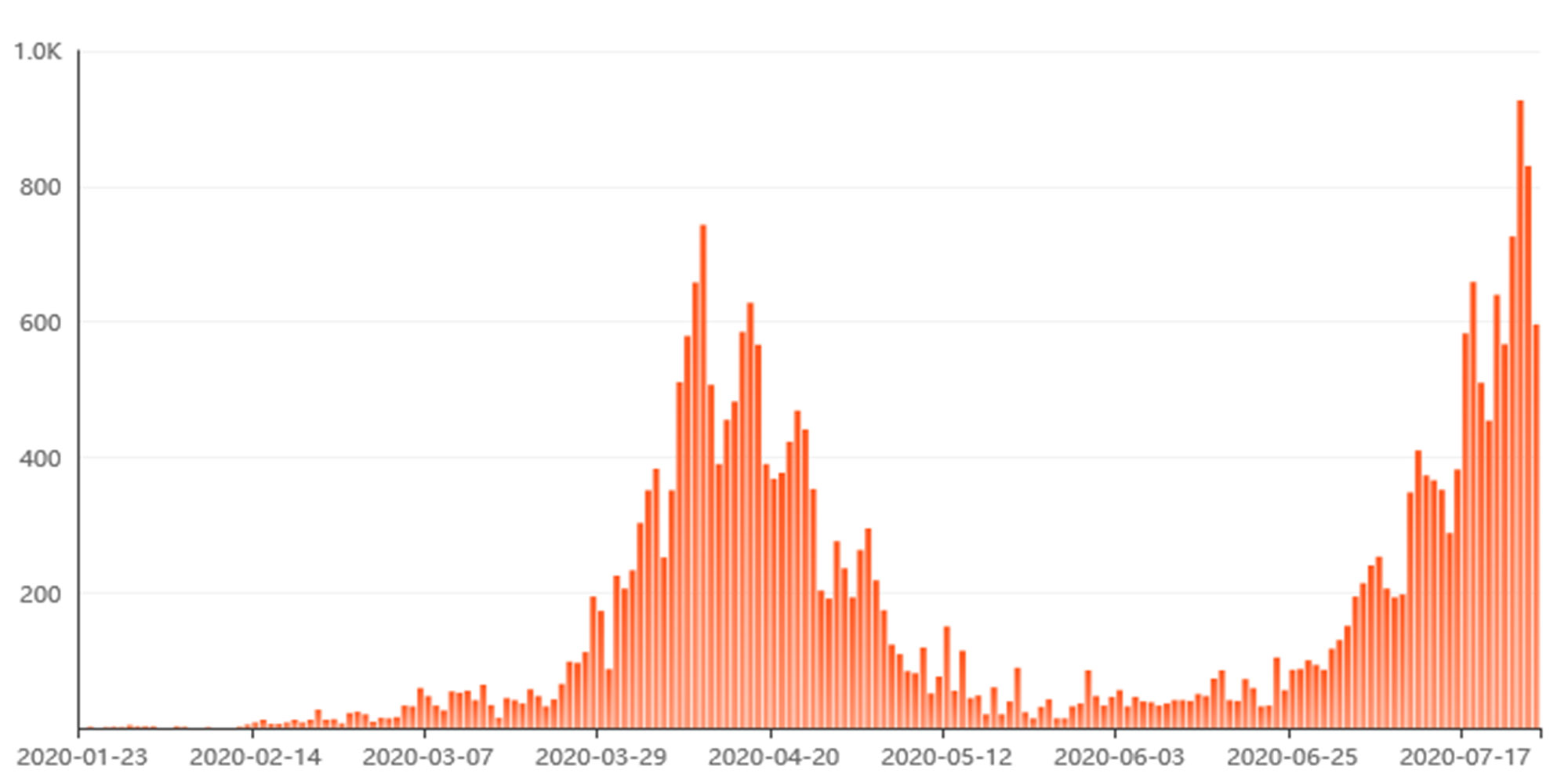 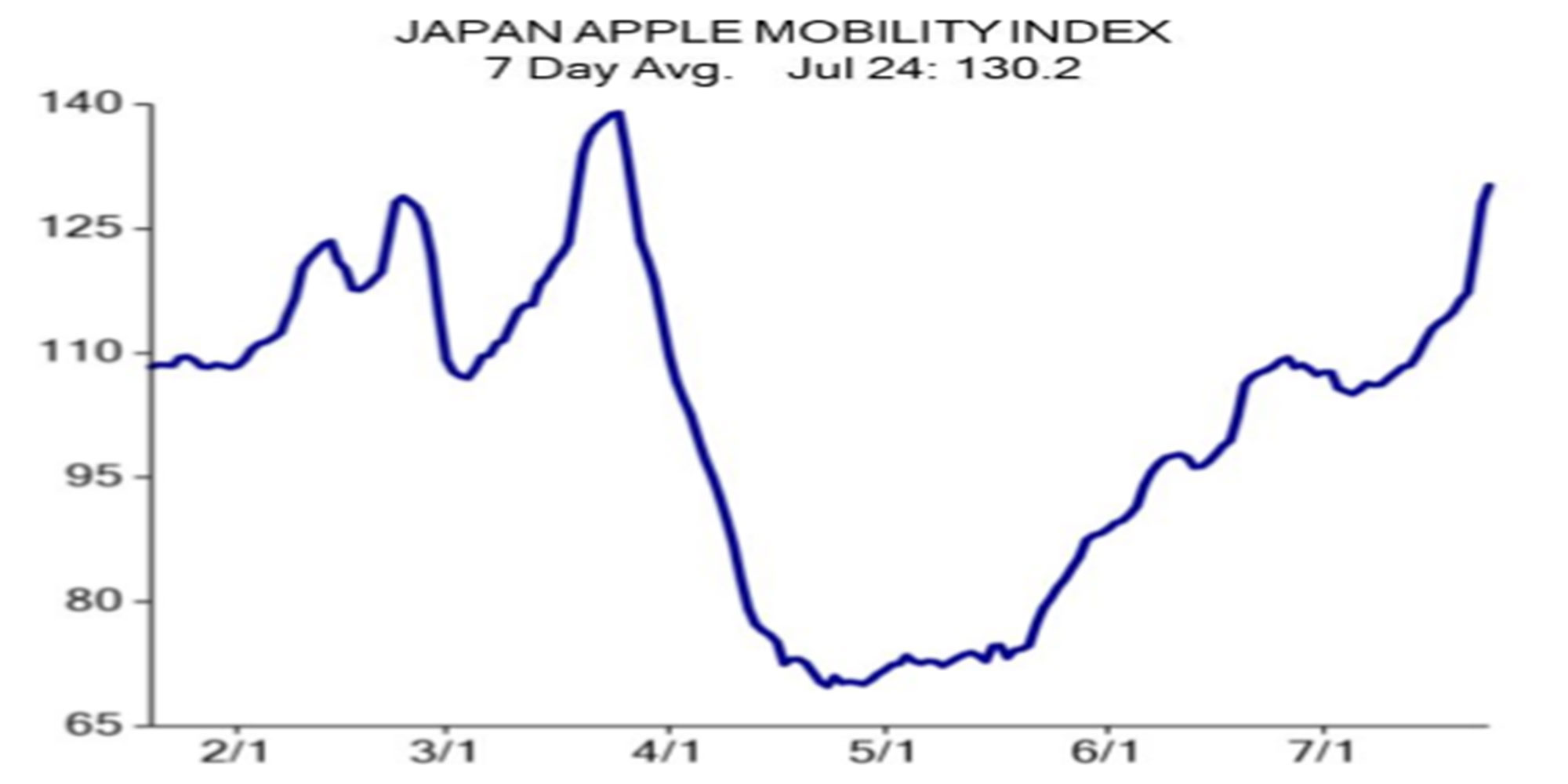 Despite the persistent risks associated with a re-escalation of the health crisis, the combination of fiscal and monetary responses have the potential to provide a material stimulus to major economies through 2021.  The debates on the shape and timing of a recovery continue, but the magnitude of the policies and lagged effect could provide a basis for a shift into cyclical expansion.  As the surveys for expectations for future growth have surged to new highs in some markets, the monthly Composite Purchasing Manager Indexes for many European countries have surprisingly rebounded to levels not seen since 2018.  The Producer Price Indexes remain in negative territory, indicating persistent weakness in pricing power in the current demand environment, but these could lag a recovery as the output gap narrows.  Credit spreads have reversed course and narrowed for many developed corporate and sovereign issuers, though some concerns persist for many emerging markets.  Automobile and retail sales have bounced off recent lows in Europe and the U.S., despite consumer confidence globally remaining at historically low levels.  Additionally, the U.S. dollar, typically a “safe haven” currency, has materially weakened against the pound, euro and yen, which are more cyclical.  So, while the headlines still convey the risks associated with the crisis, some indicators exhibit potential for more optimism, despite persistent uncertainty related to the pandemic. 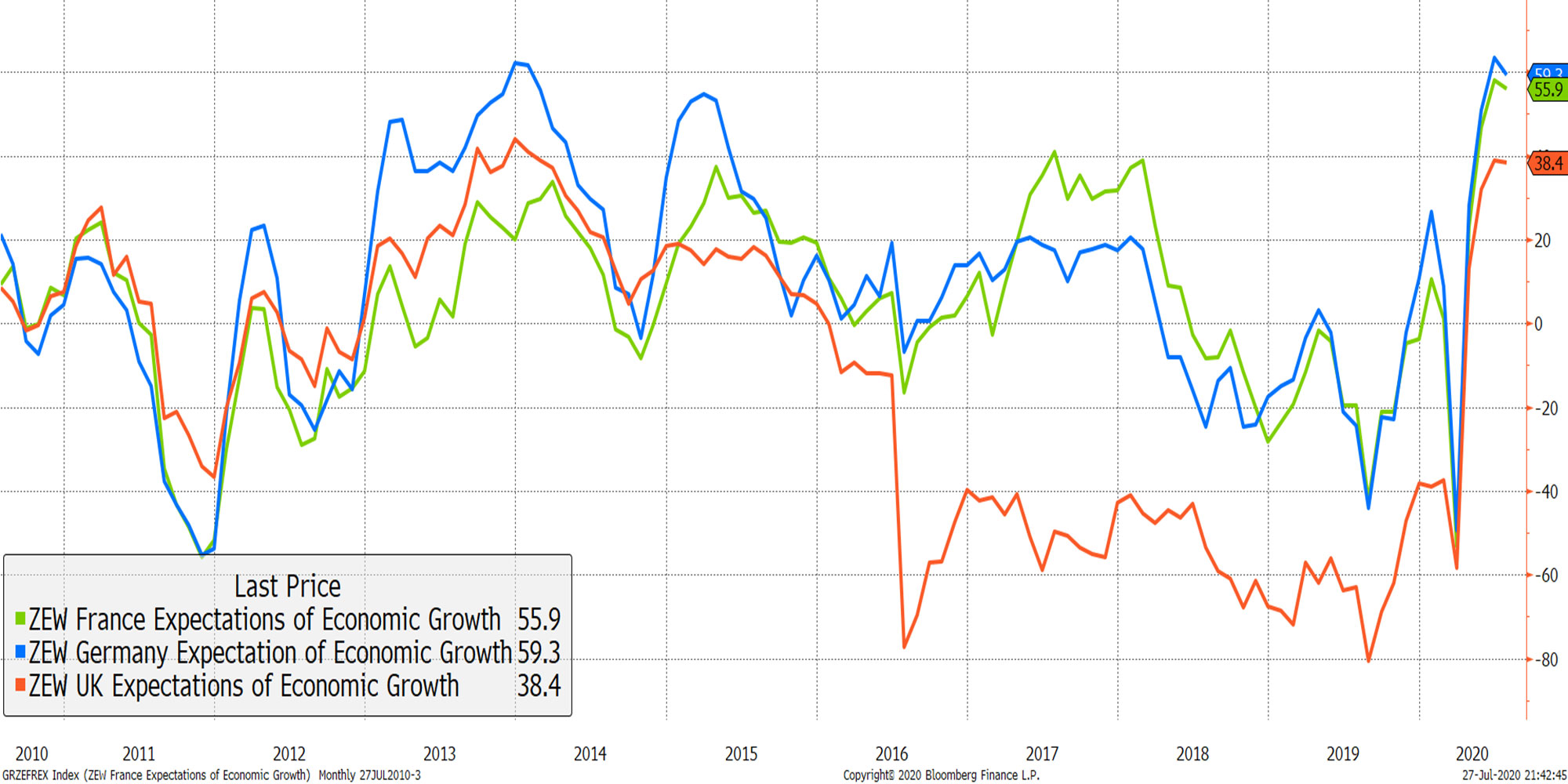 Though sequential data continues to point towards improvement, there is definitely not a clear line of sight to a “Goldilocks Scenario,” as both annual growth and inflation will likely remain below target ranges over the near term with residual downside risks.  The most obvious risk remains the epidemiological risks, but geopolitical risks continue to present scenarios that warrant consideration.  Top of mind is the escalating rhetoric and saber-rattling between the United States and China.  The Chinese Communist Party has been increasing its authoritarian control through actions in Hong Kong, with Uighurs, increased censorship, and suspected, state sponsored misinformation campaigns and intellectual property theft.  While “President” Xi has certainly been drifting this direction throughout his [now] lifetime term as leader of the party, the current administration’s hardline policy has perhaps forced their hand in some respects.  While other nations have perhaps been more diplomatic, the responses by many European nations, for example tighter controls of Chinese acquisitions in Germany and recent banning of Huawei in the United Kingdom, exhibit their growing skepticism.  If this rift continues, it could undermine existing supply chains and the global phenomenon that have supported low inflationary growth for the last two decades.

Credit quality will also deteriorate, and the ultimate capital destroyed during this credit cycle is yet-to-be determined.  Promoting transmission of monetary policy through the credit markets by preventing systemic capital deficiencies will be important in determining the steepness and sustainability of a recovery.  We expect credit issues to persist into 2021, though we should start to gain a better perspective on the scope of the credit cycle during the second half of this year.  The election in the United States also provides some level of uncertainty, as the low tax and regulatory regime risks shifting dramatically towards increased costs associated with taxes and regulation – offsetting some of the stimulus policies taken in the United States.  Longer term, we regularly debate the potential burden on future generations of the national debt in the United States (and other nations), and the potential for headwinds in growth through mismatches in aggregate savings and investment (not to get too “Austrian” in an endorsement of any one economic theory).  There are also potential impacts of this imbalance on currency and inflation.  These are just a few of the innumerable risk to capital markets, with the biggest risk often being a Black Swan event – like a virus – which is rarely identified in advance and impossible to accurately handicap.

The returns in the market continue to show narrow leadership, and we look for greater breadth as economic conditions improve.  Health risk, credit risk, and geopolitical risks persist, but there has been a massive fiscal and monetary response, as measured by GDP.  Current economic data – particularly, as measured on an annual basis – continue to show stress on economic activity, which will lead to lower earnings per share for equity indexes during 2020.  As stimuli flow through the marketplace, these have potential to lead to material growth in 2021.  The strides in research and development for treatment and vaccines should reduce the uncertainties of a renewal of a draconian, shelter-in-place policy and further reduction in economic activity as we head towards yearend.  Unfortunately, risks remain for second waves of infection unhinging a nascent recovery in developed markets.