Twelve months ago, we were still in the longest economic expansion in U.S. history.  Unemployment sat near historic lows, wages and income continued to strengthen, and inflation readings remained stable.  Then, COVID gained a foothold on our shores.  The human impact has been harrowing, with the nation on pace to lose more citizens to the pandemic than the 405,000 American souls lost in World War II.  The public health response to the pandemic, imploring social distancing and mandating partial or complete lockdowns, worked initially to drive down infections and “flatten the curve.”  However, these steps precipitated a severe economic crisis analogous to a natural disaster, as supply, demand, and financial shocks struck in unison.  Individuals have lost livelihoods and businesses, and the burden has fallen most harshly on those least able to bear the losses.

Unlike the beginnings of many recessions when it is initially unclear whether or not the economy has entered a downturn, the emergence of the pandemic and the subsequent response of public health policy made the immediacy of the economic downturn painfully clear.  Policymakers rightly heeded this warning and acted swiftly with record amounts of fiscal and monetary stimulus.  On the monetary side, the Federal Reserve Bank moved in March to reduce its key policy interest rate by 1.50% to near zero percent, the same level used in the previous recession.   The central bank also resumed asset purchases and launched a series of emergency lending facilities, both designed to reassure financial markets and support commerce.  These actions by the Federal Reserve contributed to lower borrowing costs for households, businesses, and state and local governments.  Moreover, these measures boosted interest rate-sensitive sectors of the economy such as housing and autos, which have rebounded sharply over the past six months.

Just as vital, Congress injected fiscal stimulus into the economy by sending over one-half of U.S. taxpayers a significant stimulus check.  In addition, unemployment insurance payments were augmented by $600 per week for a defined period.  This relief enabled many households to remain current on their debt service, reducing the potential strain on the banking system.  Congress also targeted small businesses, which represent the bulk of U.S. payrolls.  The Paycheck Protection Program (PPP) allowed small businesses to apply for low-interest loans administered by the Small Business Administration.  Many of these loans will be eligible for forgiveness.  The PPP was an effort to enable small businesses to retain as much of their payroll as possible on the presumption that the economic contraction, while sharp, would be relatively short lived.  Thus, if employers and employees could weather the pandemic storm in place, the economy would be easier to reboot.

The equity market, as measured by the Standard & Poor’s 500 Index, rose 18.4% in 2020, while corporate earnings declined by nearly the same amount under the strain of the economic recession. Historically low interest rates and the prospects of a sharp economic recovery in 2021 underpinned the significant increase in the multiple of earnings investors were willing to pay.  Despite the headline strength of market indices in 2020, the market appreciation has been extremely narrow.  Three stocks – Apple, Amazon, and Microsoft – accounted for 47.6% of the Standard & Poor’s return in 2020 due to the capitalization weighted nature of the index and significant price appreciation of these three companies.

As we turn the calendar, a clear economic recovery has taken hold, analysts have begun to revise corporate earnings estimates higher, while consumer and business confidence levels are increasing.  Massive fiscal and monetary policy stimulus have undoubtedly helped blunt the recessionary damage to the economy.  Human ingenuity in terms of behavioral adaption as well as vaccine and therapeutic developments have been remarkable and impressive.  The monetary and fiscal policy prescription to combat the 2020 recession has created a backdrop that encourages higher stock and bond valuations, providing support to consumer net worth.  Exogenous shocks can still disrupt the nascent economic recovery, but as we look ahead into 2021, we are optimistic.

As we have in prior fourth quarter reviews, we have included a compendium of economic and market related charts. 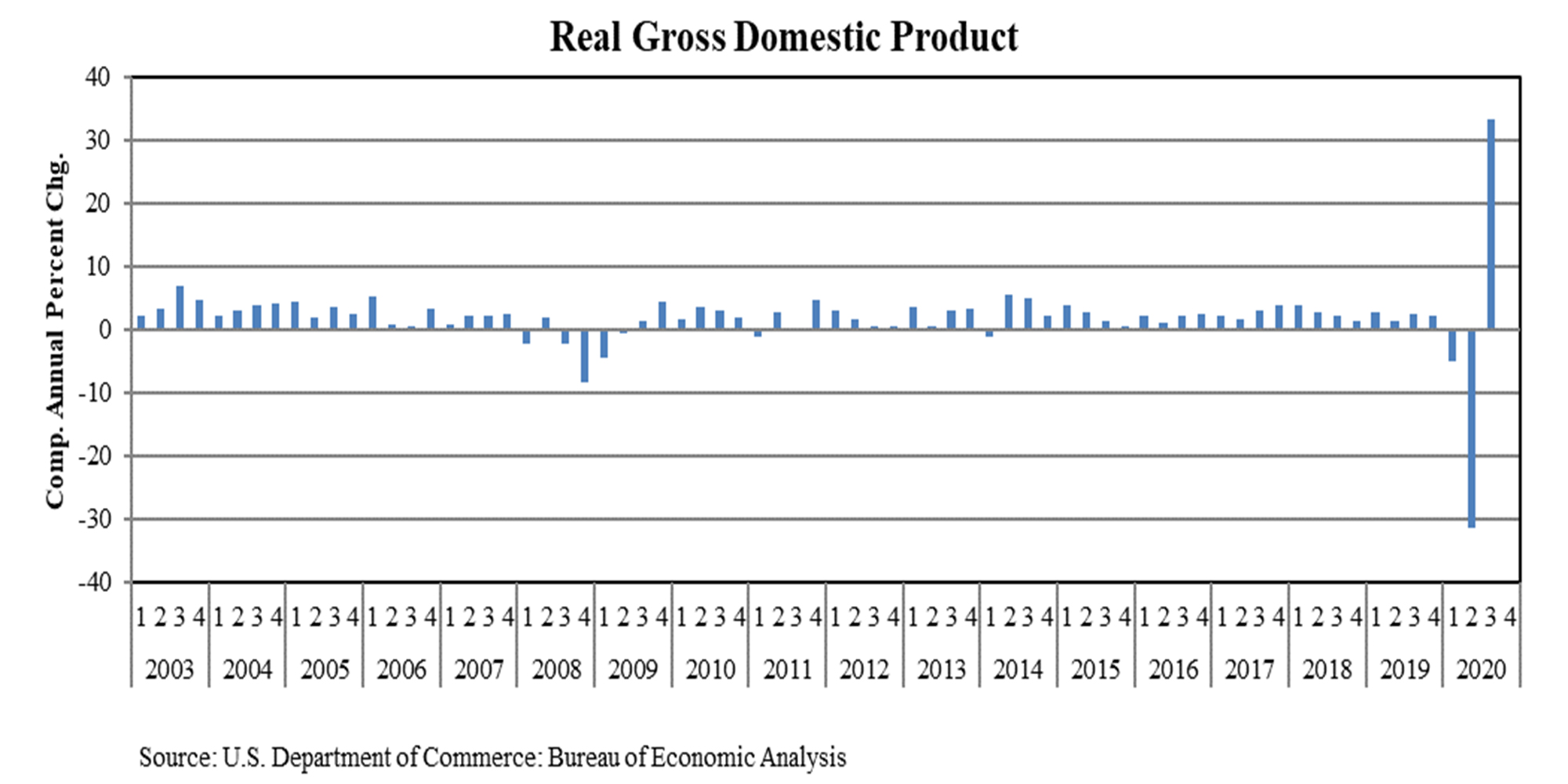 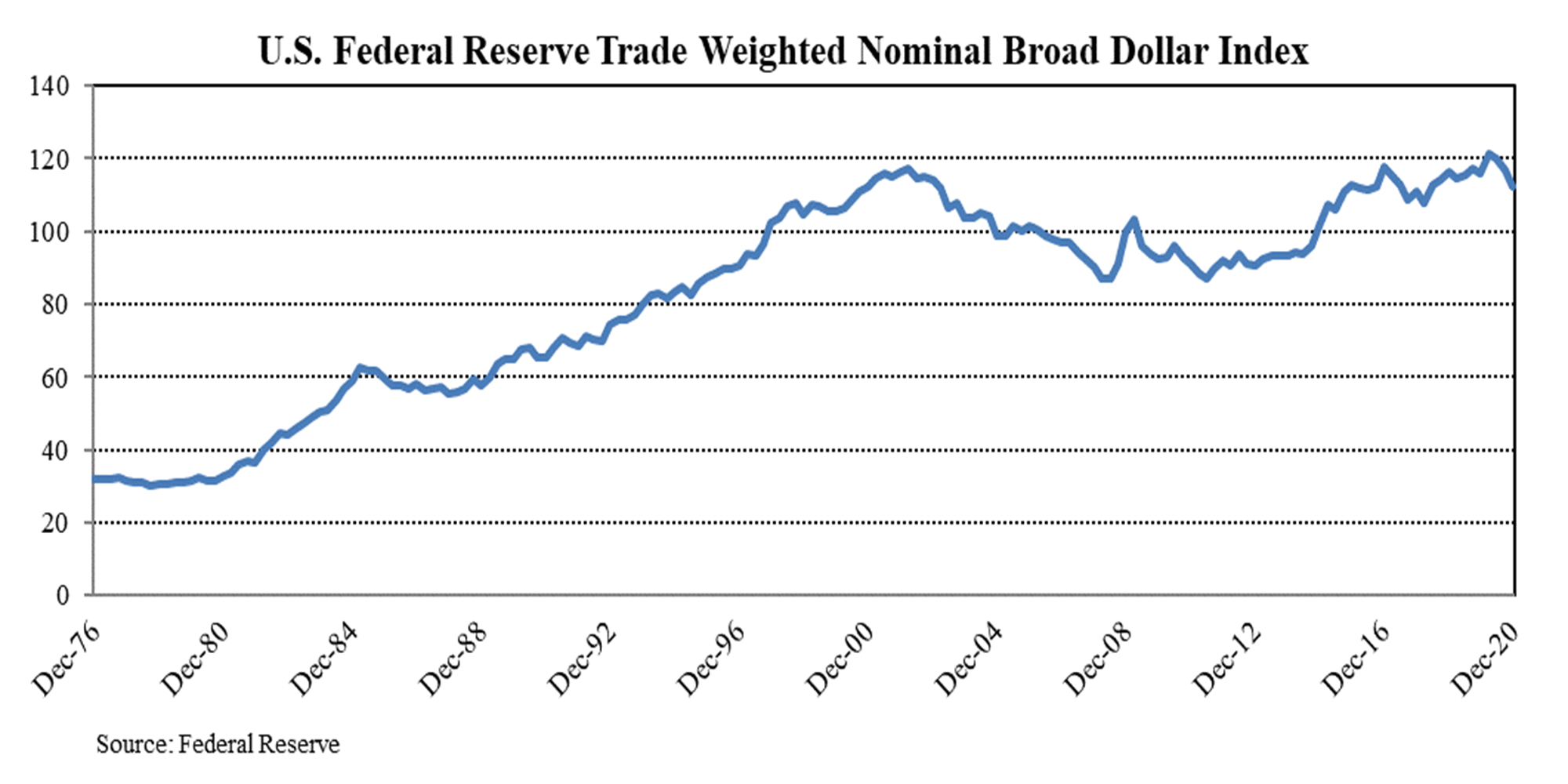 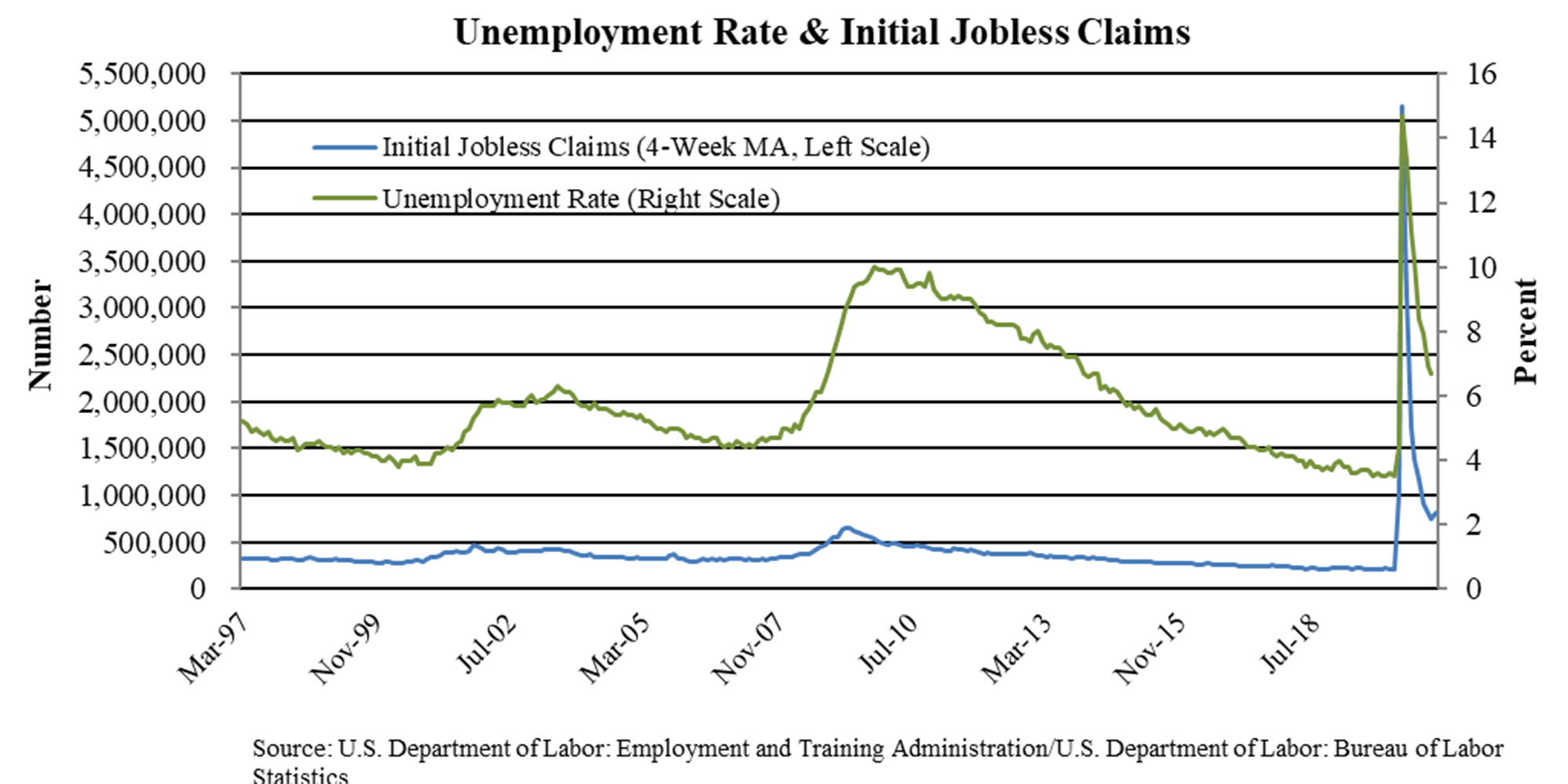 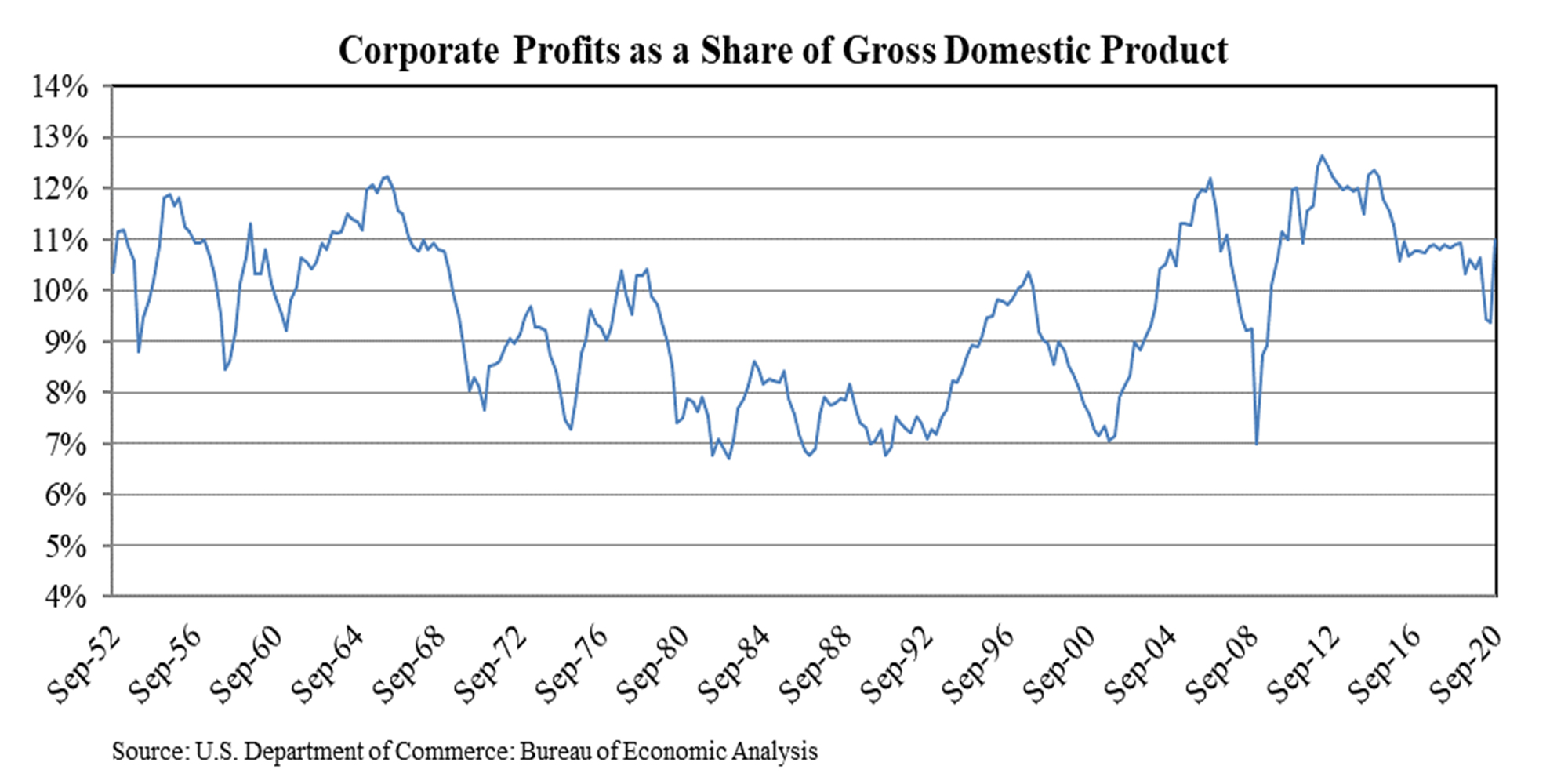 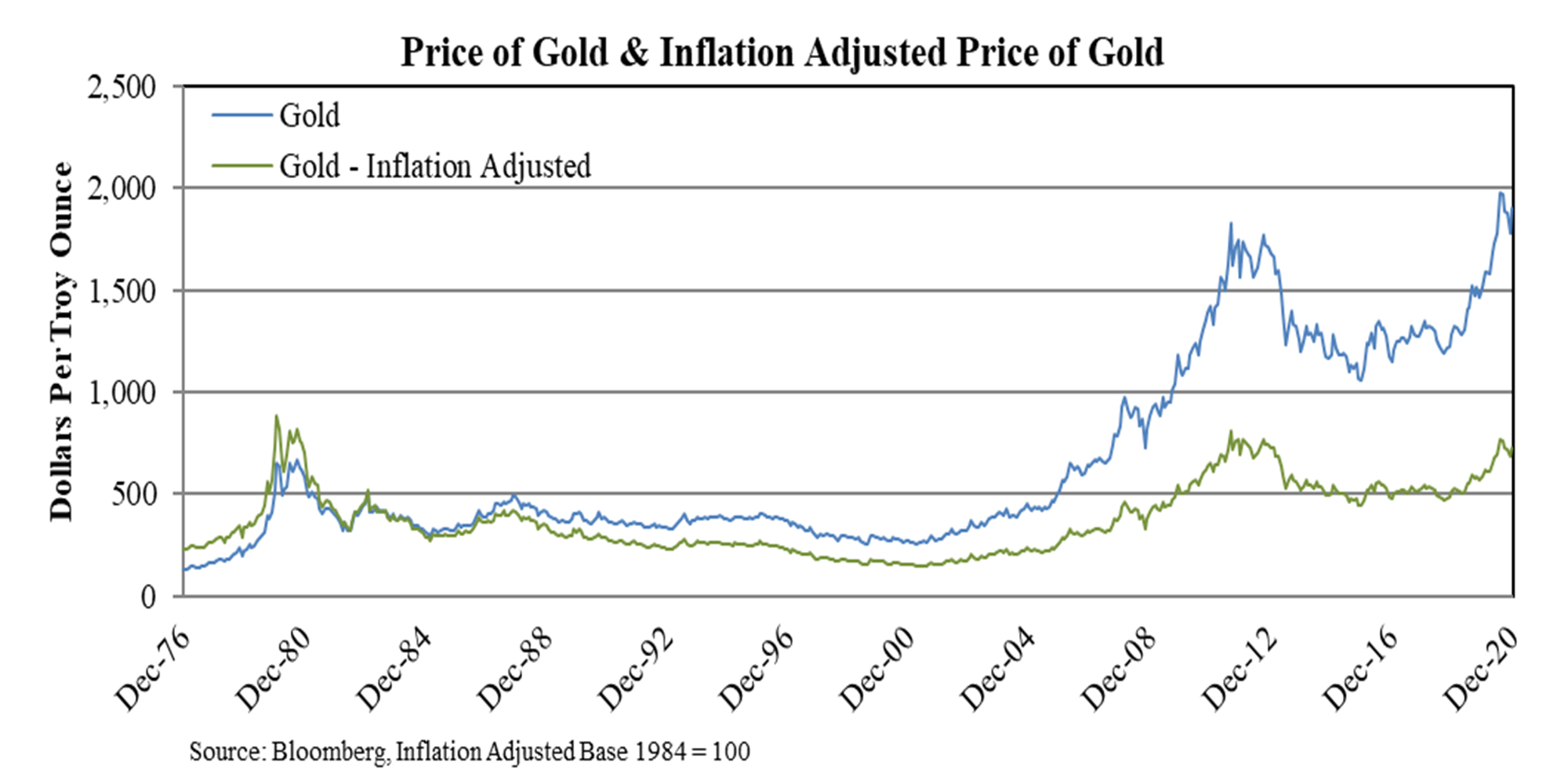 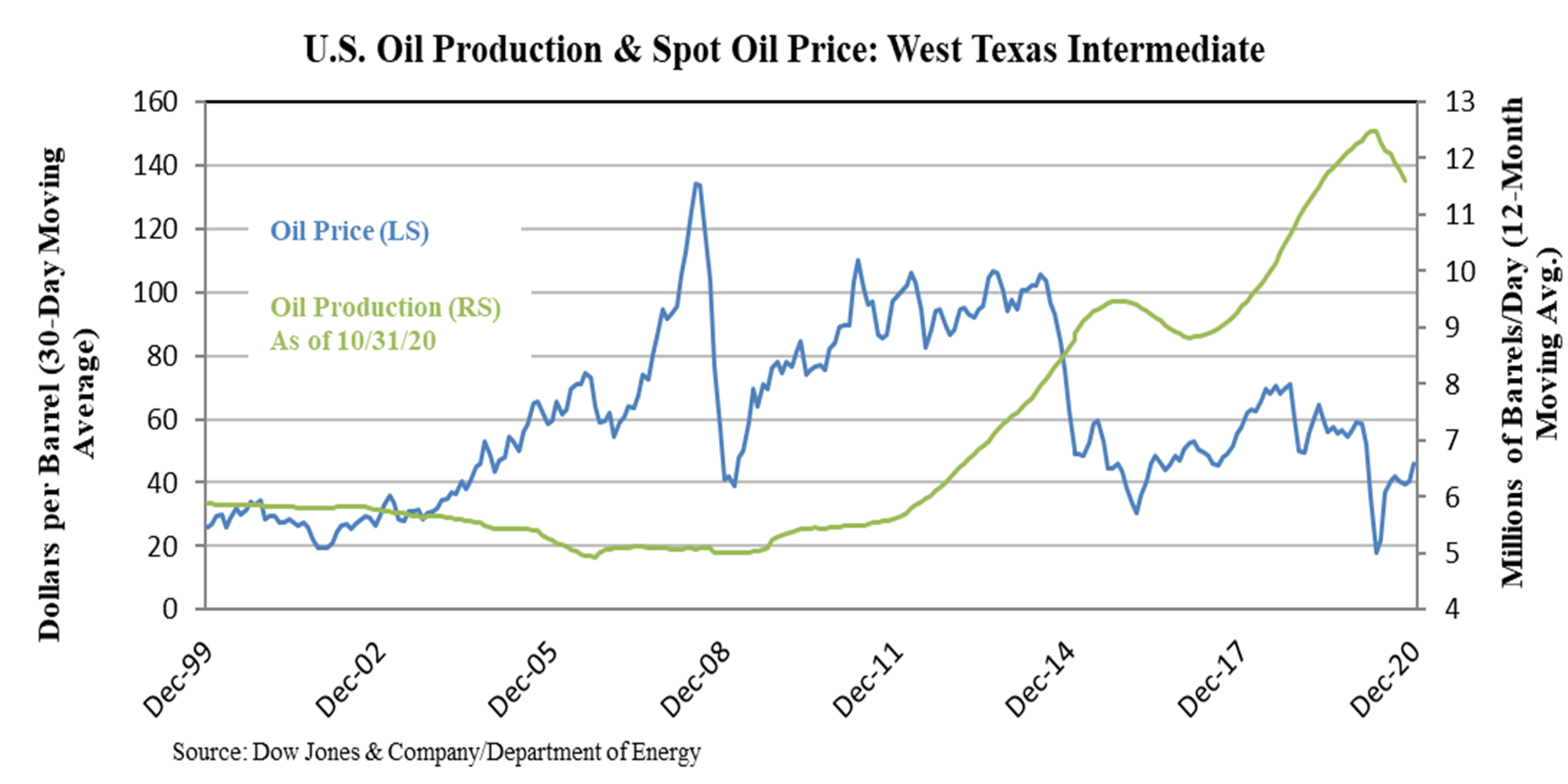 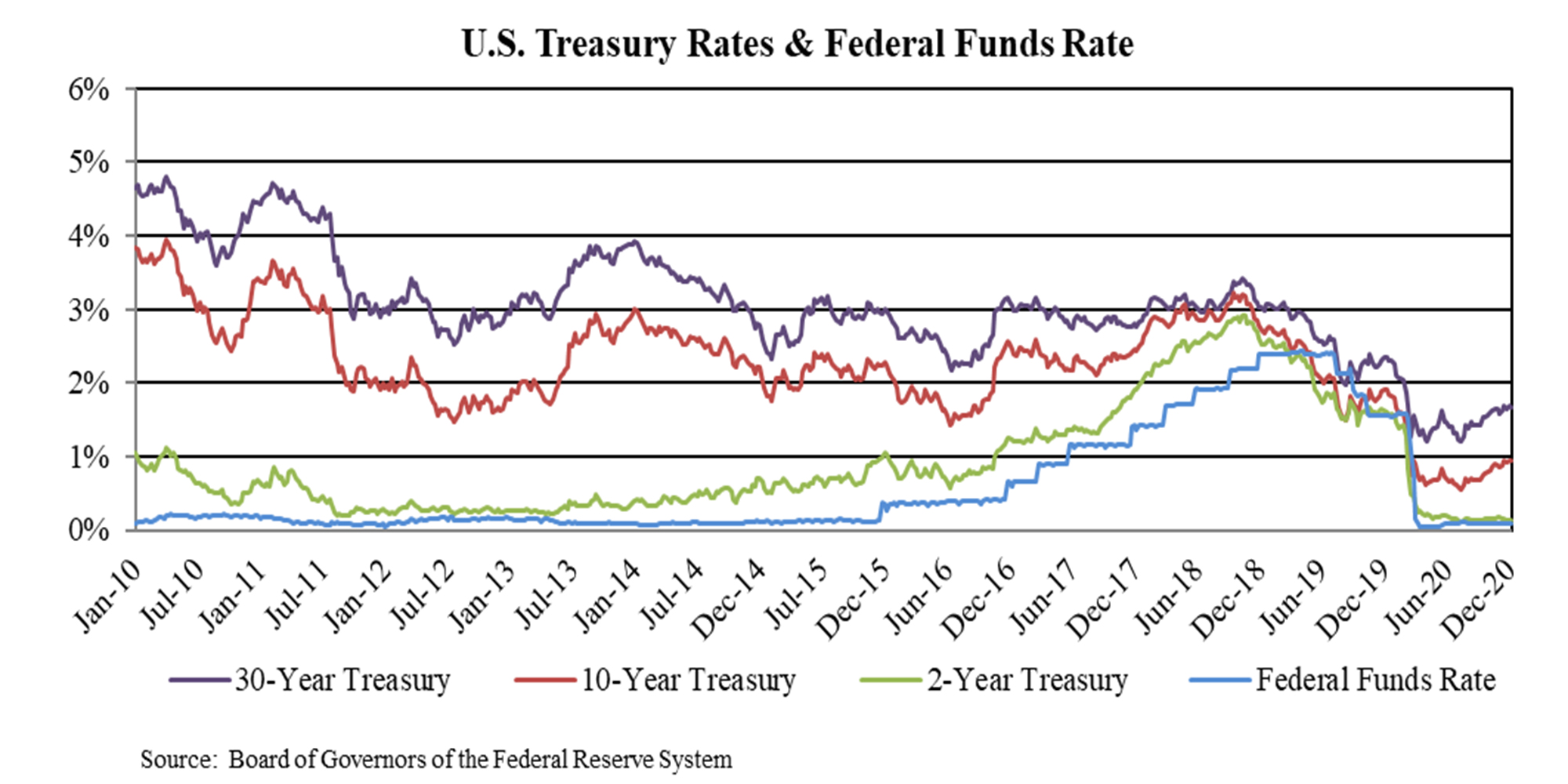 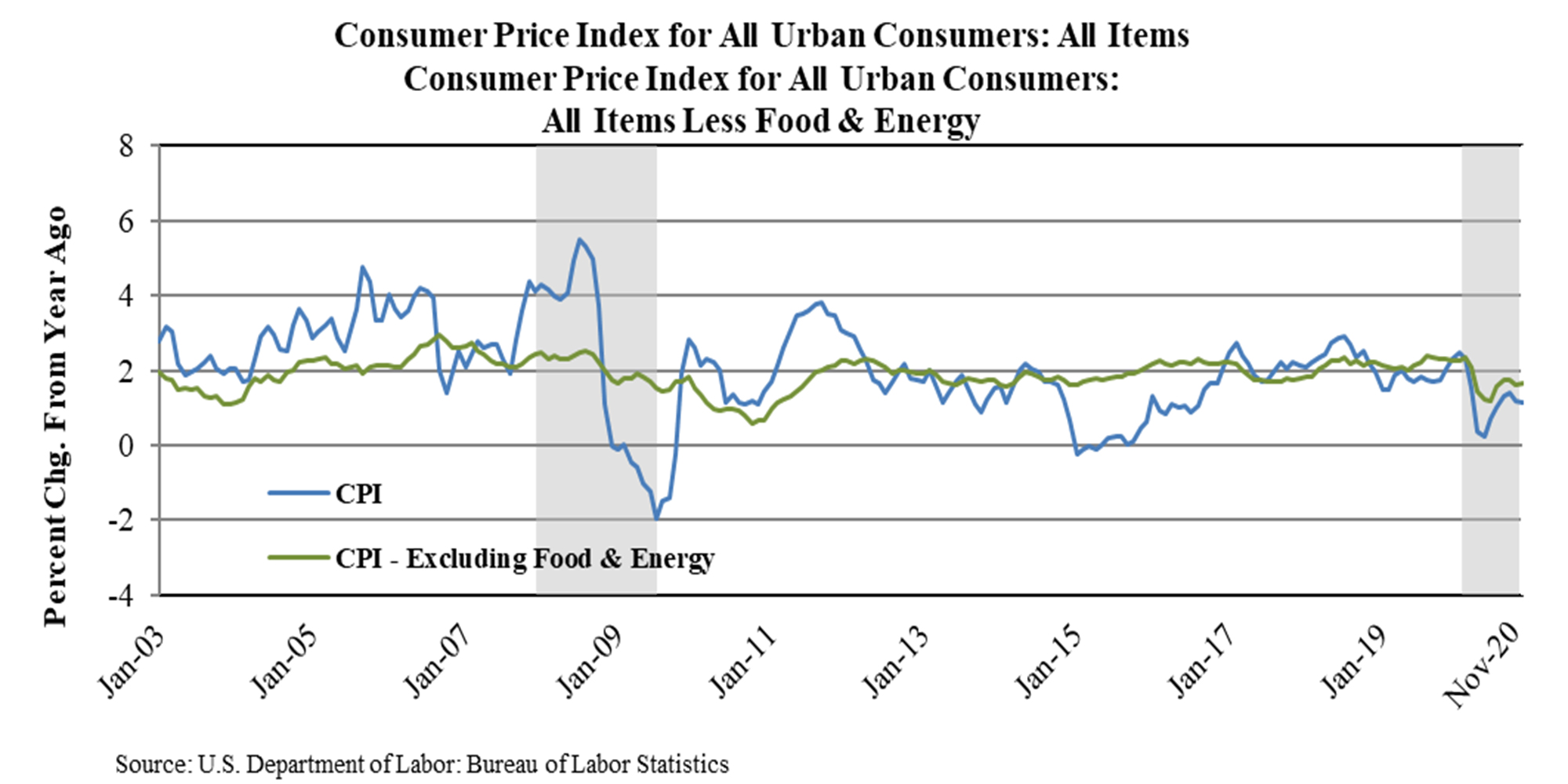 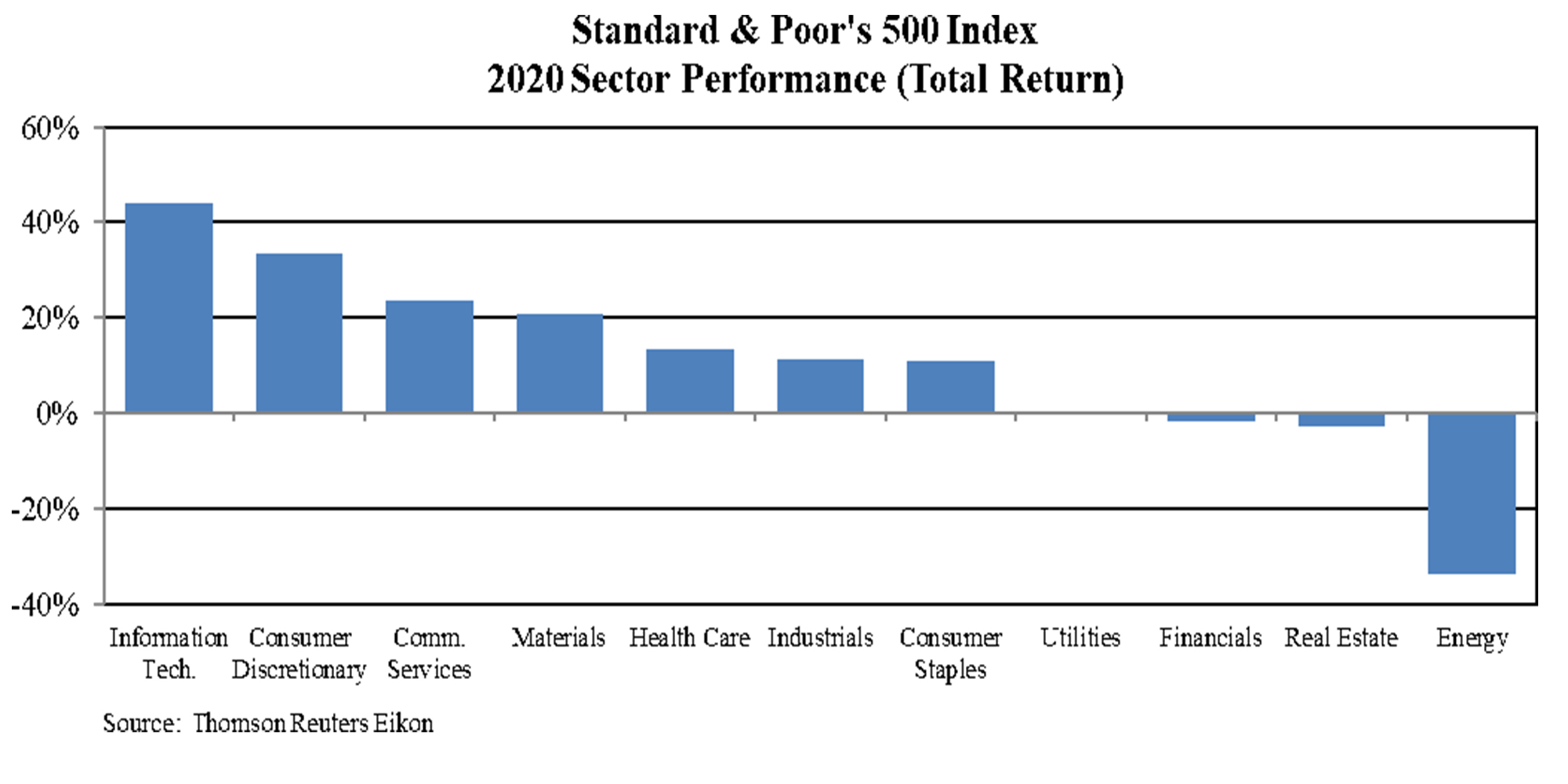 As we enter the New Year, the economic backdrop remains constructive for equities in our view.  Corporate earnings should rise slightly less than 20%, employment should continue to improve as the economy reopens, and the Federal Reserve is likely to maintain an easy monetary stance.  Consumers continue to save a remarkably high portion of their disposable income, which represents considerable pent-up purchasing power.  Housing has been incredibly strong, driven by record low mortgage rates and low home inventory and the “Working From Home” adaption, and this strength should continue in 2021.

We expect this positive backdrop for corporate earnings and consumer spending to drive above-trend Gross Domestic Product (GDP) growth in 2021.  The equity market should perform well in this environment, although we would not be surprised if equity market returns are lower than the forecasted growth in corporate profits, as the multiple of earnings investors are willing to pay is likely to decline as investors begin to anticipate higher inflation and interest rates in response to robust economic expansion.

Four primary tailwinds should support the sharp rebound in corporate earnings in 2021.  First, many companies have been able to retain pricing power.  Second, housing data remain robust, which has a multiplier effect on demand for consumer durable goods, such as appliances and furniture.  Third, the consumer is well positioned with excess savings, rising real incomes, and higher household net worth.  Finally, record low interest rates have prompted companies to raise debt capital to fortify balance sheets and insure liquidity.  One result of this activity could be the resumption of broader share repurchases by companies in 2021.

One of the notable and unusual developments of the COVID economic downturn has been an extraordinary rise in the personal savings rate.  The CARES act authorized significant payments to consumers.  Between March and August, at least $712 billion flowed into personal income as a result of COVID-related stimulus measures including the previously mentioned direct payments, supplemental unemployment insurance, and PPP income to proprietors.  Historically, consumers draw down their savings in an economic downturn.  However, the portion of disposable personal income that consumers saved, known as the savings rate, soared from 8.3% in February of 2020 to 33.6% in April before settling most recently to 12.9% at of the end of November.  Restricted spending on services such as dining out, getting a haircut, or having elective surgery supported this savings rate.  These savings equate to an incremental $1.2 trillion in people’s pockets at a time when the economic outlook is brightening, and vaccines begin to roll out.

The extraordinary events of 2020 likely position 2021 to be a year of transition in our view, with spending shifting back to services from goods, to private from public, and to in-person from virtual.  The impact of COVID cases, the effectiveness of vaccines, and the eventual fading of fiscal stimulus will influence the trajectory of the economic recovery moving forward.  It is important to recognize that the stimulus provided by lower interest rates inevitably wears off and the purpose of reducing interest rates is to pull consumption forward.  Consumer purchases of homes, appliances, and autos bring future economic activity into the present.  But when the future inevitably arrives, that economic activity is missing.  There is little question the economic bite of the pandemic would have been far worse in the absence of significant monetary and fiscal stimulus.  However, we must appreciate the degree to which the current economic uplift is being driven by record stimulus.

Considering the combination of the recently approved $900 billion fiscal stimulus package, the prospect of households unleashing substantial pent-up demand in 2021, and the higher likelihood of even more stimulus due to the change in control of the U.S. Senate, the setup for inflation to increase is better than it has been for many years.  Historically, elevated inflation readings have often spurred a tightening of monetary policy.  However, the Federal Reserve has stated that it is willing to allow prices to run a little “hotter” than in past cycles.  At some point in the new year reports will likely indicate the rate of inflation is rising above the central bank’s 2% target.  In a recent press conference Federal Reserve Chairman Jerome Powell took care to communicate that if inflation does rise as the economy opens, this move will likely prove temporary.  However, investors have been repeatedly conditioned to anticipate a tightening of monetary policy in response to rising inflation.  Rising bond yields, which we expect to be a feature of 2021, reflect increased expectations for higher inflation.

We do not anticipate an inflationary overheating of the economy, because the output gap – the difference between where the economy is and where it should be – was likely around 5% of GDP in the fourth quarter, signaling significant excess capacity in the economy.  The most constructive outcome that could emerge is a kind of “Goldilocks scenario” in which prices rise, but not at an alarming pace.  One possible risk to this outcome would be that the economy recovers much faster than policymakers and investors anticipate.  For example, the aforementioned new $900 billion fiscal package equates to about 4.5% of GDP, or just about the size of the output gap.

A key risk to our outlook for 2021 is a sharp rise in bond yields, which has the potential to send ripples through the capital markets and economy in at least one of three important ways.  First, a dramatic move in this cost of capital tends to reveal weaker portions of the capital market that are reliant on cheap liquidity.  Second, higher yields pressure interest rate sensitive sectors in the economy such as housing and autos.  Finally, higher yields can weigh on the valuation of assets, including equities, particularly if those valuations are elevated.  The ability of higher interest rates to exert downward pressure on the multiple of earnings is particularly of interest today.  Following two years in which the equity market rose in excess of corporate earnings growth, we would not be surprised to see a reversal of this trend in 2021, as corporate earnings growth exceeds the returns provided by the equity market. 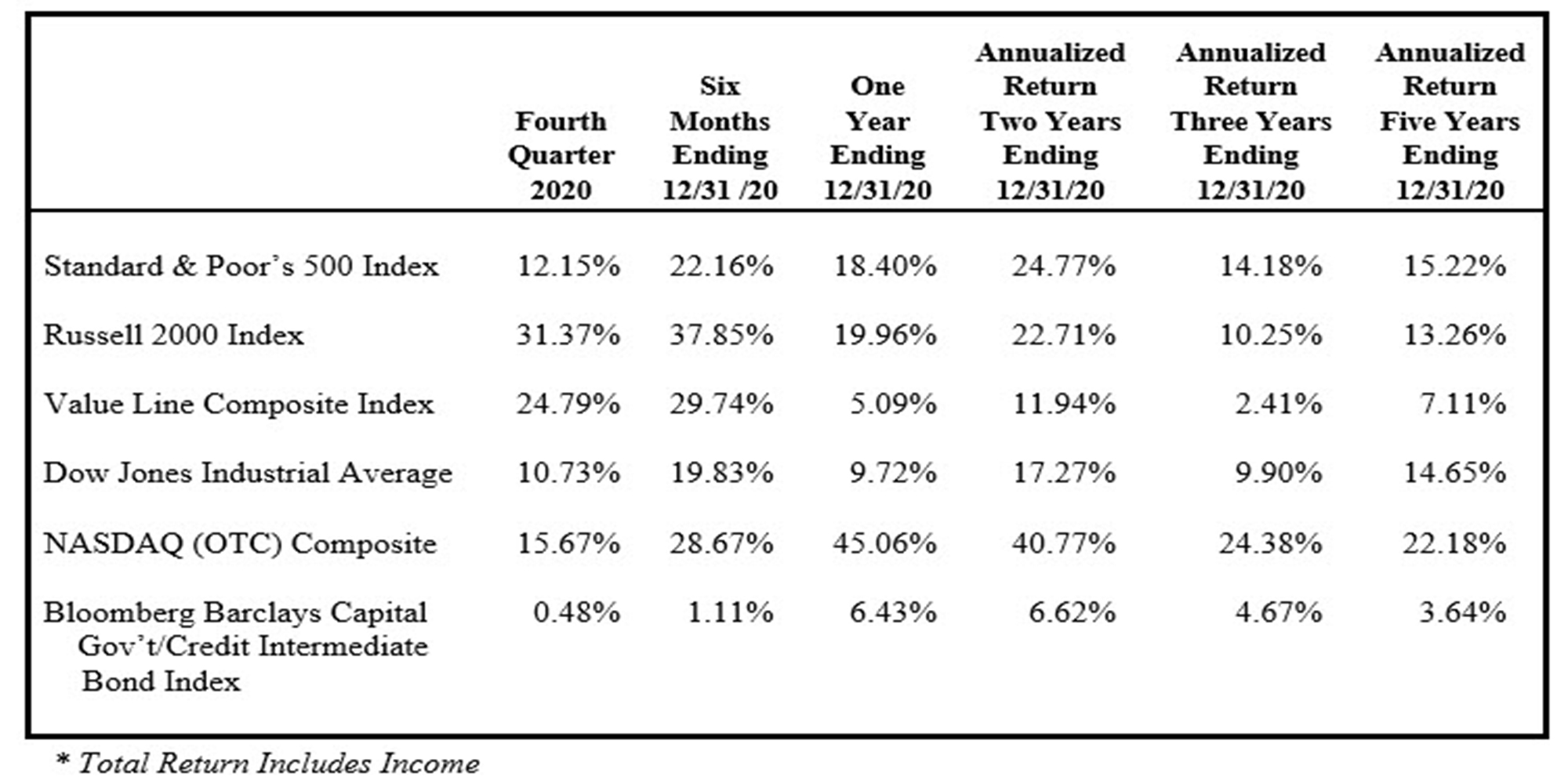